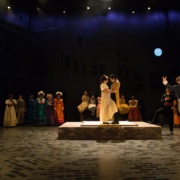 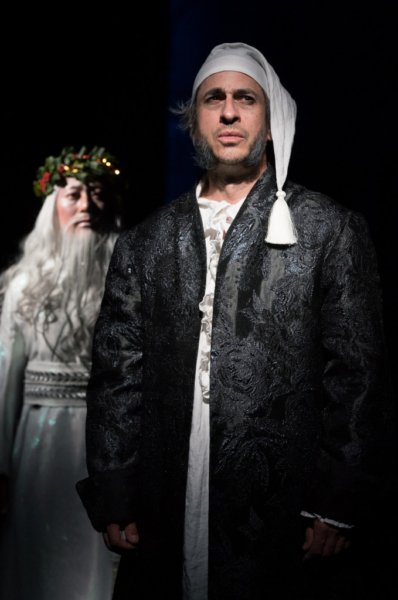 One year, eight months, and seven days. Six hundred and sixteen days.  The last time the lights went up on an opening night performance at the Guthrie Theater’s Wurtle Thrust Stage feels like a thousand lifetimes ago.  So much in our lives–in the world–has changed since we trudged warily over crusty March slush mounds to see what we had no idea would be our last live performance in twenty long months.  The wait felt interminable to those of us fortunate enough to lug our monitors home from our offices and set up shop in our basements and spare rooms; I can only imagine how it felt for the performers and crew members so suddenly shut out of their lives’ calling.  So it seems almost cosmically appropriate that our return to live theater would be Charles Dickens’s perennial classic, A Christmas Carol.

A Christmas Carol was meant from the start to be a sort of earworm, working its way into the public’s subconscious so thoroughly that it changed the very nature of society.  It succeeded in a way Dickens could scarcely have imagined, becoming as much a part of the American holiday landscape as sleigh bells and Mariah Carey.  There have been as many interpretations and adaptations of the simple 1843 novella over the years as there are recipes for turkey or figgy pudding, each putting a unique stamp on the well-known story.

Rather than reach back into the library and pull out the script they had used for many a year, director Joseph Haj took up a new script, written by Lavina Jadhwani, to chart a new course for the 2021 return.  In this, Scrooge plays a more active participant in his eventual conversion, remarking at points along the journey about the things he might say to the people in his life who he has ill treated.  It’s strange how just a few changes of inflection, an aside here and there, can so boldly reshape a narrative that is as familiar as our own front doorstep.  They took a chance with this new story, which makes use of an all-new set and a boldly diverse cast, and it mostly works.  There were points where the production felt stiff or unsure of itself.  Nothing so obvious as a flubbed line or missed cue, but the lack of preview performances (down to one from the usual five) meant that this was only the second time the company had performed before a live audience and there were still matters of pacing and projection to work out.  (It also didn’t help matters that the performance was delayed by at least 45 minutes due to a disturbance caused by an audience member that wasn’t resolved until that person was escorted out by Minneapolis police–adding as yet one more reminder that we are living in different times.)  No doubt these will all smooth out with time.

As Haj aptly sums up in the program materials, at its heart A Christmas Carol is a ghost story, designed to haunt the dreams of London society into looking out for their less fortunate fellows.  For good or bad, we all have our memories of the first time we experienced the gruesome Ghost of Christmas Yet-to-Come.  I overheard several audience members remarking to their companions afterward about their memories of being scared by this scene and how this production’s interpretation measured up.  I, for one, remember the hooded figure in the animated Mickey’s Christmas Carol–of all things–scaring the daylights out of me when my family first watched it, so it’s almost a rite of passage for little ones to get their first taste of horror just as the story reaches its climax of celebratory redemption.  This year’s Ghost was formidable, but not quite as imposing as the enormous winged reaper of years’ past.  Nevertheless, it seemed to fit with the somewhat scaled down production and will certainly leave an impression.

In so many ways, this is the Christmas Carol we need right now as we haltingly stumble toward our post-pandemic future.  Like Scrooge, we are each called to be active participants in our community’s redemption.  This takes a turn for the literal with the Guthrie’s explicit vaccine and testing requirements.  For more details, see their website.  The show runs through December 27.

25% off Aveda products at Juut
Scroll to top