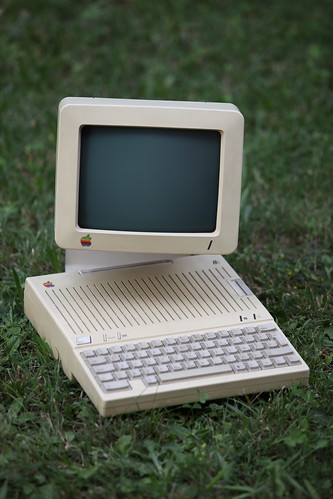 I’m sad that this…uh…”musical experiment” is during the day.  The Beeptacular Spectacular sounds really interesting.  If any of you readers go, please report back!

We are gathering as many Apple II computers as possible together in the FlatPak House for what can only be called a “Beeptacular Spectacular” concert using vintage computers as an orchestra.

As a grand “musical” experiment, Jason Torchinsky has written a crude 16-tone sequencer for the Apple II, and will try and gather up as many Apple IIs as possible to perform a live, dynamic sort-of concert/musical event. Machine Project’s resident music guru, Chris Kallmyer, will be on hand to discuss the nature of music, and generally help make things somewhat listenable. Who knows what the end result will sound like? A chorus of angels poking at touch-tone phones? All the computers from the background of every sci-fi movie from the 50–80s going off at once? A serenade by a truckload of R2-D2s? You’ll have to come and listen for yourselves. Please bring your own Apple II if you’ve got one!