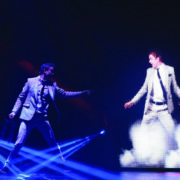 Described as a cross between David Copperfield and Justin Timberlake, magician Adam Trent fuses classic magic with dancing, comedy and some seriously cool technology to entertain and confound a new generation of fans. His edgy, fun style will be on full display in The Illusionists Present: Adam Trent, an immersive entertainment extravaganza of magic, comedy and music that’s perfect for the whole family. If you think you’ve seen it all, Trent is happy to shatter those stereotypes with a performance that redefines what a magic show is supposed to be. With more than 300 solo shows each year, Trent’s popularity is rising, so make sure you snag tickets for this show at St. Paul’s Ordway Center for the Performing Arts before they disappear!

Goldstar has a limited number of discount tickets starting at $42 (Reg. $53). Also, keep in mind the Ordway’s awesome rush program!