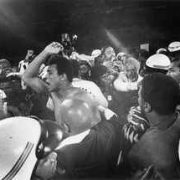 Klein’s extraordinary, incendiary film provides a probing look at the legendary Ali, following his career from his breakthrough 1964 bout with Sonny Liston to the epic “Rumble in the Jungle” with George Foreman in Zaire a decade later. With unprecedented access, the film traces the boxer’s transformation from the clean-cut, loud-mouthed Cassius Clay to the outspoken antiwar revolutionary/Black Muslim Muhammad Ali to a seasoned, wily pugilist and international idol. 1974, 35mm transferred to digital, b/w and color, 120 minutes.

Muhammad Ali, The Greatest, part of the Ruben/Bentson Moving Image Collection, will remain available via self-selection in the Walker Mediatheque during gallery hours. The Mediatheque will be closed for renovation beginning August 2016.