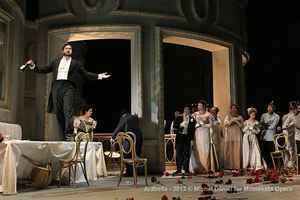 @jakwong42 attended the social media preview night for Arabella at the Minnesota Opera on Thursday night and has graciously provided me with the following review.

I can happily report that I had a great time. For those of you not familiar with the story of Richard Strauss’s comedic opera, click here to view a brief video synopsis.

This is a comedic opera, so everyone winds up happy in the end. Strauss has filled the libretto with many humorous moments that had us laughing out loud. The male lead character, Mandryka, falls in love with Arabella the first time he sees her picture, which just happens to be while he is the in the midst of fighting an angry bear on his estate. If Oscar Wilde had written an opera, it might have come out something like this.

The Minnesota Opera production of Arabella features many strong vocal performances, but Jacquelyn Wagner and Craig Irvin carry the show with their embodiments of these passionate characters. Strauss asks a lot of his main characters, who are rarely off-stage during the nearly three-hour long performance (there is only one break–between the first and second acts–so make it count), but Wagner and Irvin are up to the task and then some. You can watch a few key scenes to familiarize yourself with the score here, but these recordings still pale in comparison with the depth and richness of a live performance where these performers breathe an incredible amount of life into the roles. The production features a full orchestra with sixty-two musicians crammed into the pit. Despite the tight quarters, the musicians deliver remarkable sound that is as important to the show as the vocals. The set and costumes had a nice balance of simplicity and detail, but some of the color choices were puzzling. There is a very monochrome theme throughout (with one notable exception), that may represent the era well, but lacks the visual stimulation that wowed me in last season’s Turandot. In all, though, I was delighted to experience this wonderful opera and I would recommend it to just about everyone.