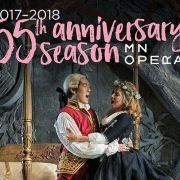 Come celebrate Minnesota Opera’s upcoming 55th anniversary season! Join us for a coffee and cake reception, followed by a sneak preview of the 2017-2018 season hosted by President and General Director Ryan Taylor and Artistic Director Dale Johnson. The program features:

The program will be approximately 75 minutes and will not include an intermission.

Sunday, October 1, 2017
2pm – Reception in the Target Atrium
3pm – Concert
Ordway Center for the Performing Arts
St. Paul
Tickets are FREE but must be reserved in advance.

Library book sales – most $1 or less
Scroll to top