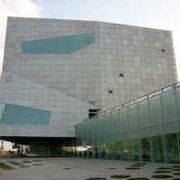 Stunning views combine with International Pop–inspired fun to set the scene for the most happening patio nights in town. Explore the roving spirit of the Pop movement with Tropicália beats, Pop cinema, and much more. Each night has a unique flavor best paired with a cocktail from the Terrace bar.

Drop in and draw with painter and muralist Yuya Negishi, whose work is a combination of traditional Japanese art and Warhol-esque Pop.

Ed Halter, curator of International Pop Cinema, has selected a series of clips from groovy, knowingly low-brow spectacles of international cinema from the late 1960s, in which camp became something of an international style melding the art-house with the drive-in.

Enjoy an eclectic sampling of tracks from Brazil and beyond by world DJ Paul Harding, host of KFAI’s Foreign Currency, and longtime former host of Radio K International.

From Tropicália to Neo-Concretism and from Rio de Janeiro to São Paulo, singer/songwriter/guitarist Robert Everest and his accomplished quartet dig deep into Brazilian musical history for a sumptuous survey of sounds and songs.

Mysteries at the Museum