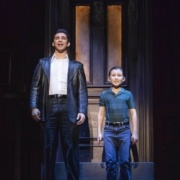 A Bronx Tale is the story of Calogero (Joey Barreiro, Frankie Leoni/Shane Pry), a young boy who grows up in the Bronx and has to decide between his family and the mob. It’s based on the one-man show by Chazz Palminteri that inspired the film starring Palminteri and Robert De Niro. It’s accurately described by amNewYork as “Jersey Boys meets West Side Story.” I suppose therein lies my underwhelmed attitude toward the whole thing.  Simply put, it’s nothing you haven’t seen before a dozen different times.  There was a time, somewhere around the mid-90s, when America seemed to have reached peak mobster.  Along with the final installment of The Godfather, films like Goodfellas and Casino, and The Sopranos on HBO, the theatrical version of A Bronx Tale was tailor made to ride the wave.  But now, neither a venerable classic nor an innovative new story, A Bronx Tale just takes up space.

Dragging things down further, the characters, too, felt like run-of-the-mill Italian mobsters from central casting, and the African-American New Yorkers played similarly to type.  That may help if you have a complex story and need to shed character development in an effort to move things along, but the simplistic story here called for no such dramatic efficiency.  What may have served Palminteri well for his one-man show (he apparently played 18 characters when it was first staged in 1989) falls flat in this format, especially as compared with all of the innovation coming out of Broadway lately. A Bronx Tale is a musical for those looking for something “new,” but familiar enough to know exactly what they’re in for. The music (almost half of which consists of reprises) was entertaining, but forgettable.  The choreography was great, and overall I thought the cast was top notch.  They just weren’t enough to elevate this above the noise of a New York street.

A Bronx Tale is at The Orpheum in Minneapolis through February 24, 2019. Tickets start at $39.

DEAL ALERT: Student/Educator rush tickets are available for all performances.
2 tickets per valid student or educator ID. $25 per ticket, cash only. Available at the Orpheum Theatre box office two hours prior to showtime. Subject to availability.