Blog - Latest News
You are here: Home1 / REVIEW: A Gentleman’s Guide to Love and Murder 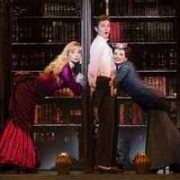 What a delightful treat!

Let me start out by listing a few things that I ordinarily find unappealing in live theater: overacting, predictable jokes, and unengaging storylines. Most of the time, I’m there for the music and the dialogue is just the stuff separating the musical numbers. For me, it’s new jokes and great music or I’m a goner. Imagine my surprise, then, when A Gentleman’s Guide to Love and Murder upended all of my expectations and had me looking forward to its inevitable return to the Twin Cities.

I didn’t know a lot about A Gentleman’s Guide going-in, other than that it won the Tony Award for Best Musical. I haven’t always agreed with the awards, but I knew it probably wasn’t going to be awful. Well, they got it right this time, because this show really is outstanding. It’s one of the fastest-paced musical’s I’ve ever attended. I suppose that’s necessary given the nature of the plot, in that lower-class Monty (the protagonist), learns of his ties to a noble family and has no fewer than eight people to murder in order to inherit the earldom of Highhurst and win the girl of his dreams–who will only marry him if he’s rich (what a catch!). The characters are simultaneously loveable and deplorable, leaving you appalled and delighted each time one ends up dead. Each of the eight family members are played by John Rapson, who did a terrific job and has a real knack for physical comedy. I often found many of the comedic aspects of the show’s twisted morals on par with The Book of Mormon (another musical I loved).

The actual music in this musical is largely forgettable and is mostly there for comedic effect and to advance the story.  Although I won’t be buying the soundtrack anytime soon, I could watch this show again and again.

A Gentleman’s Guide to Love and Murder is at the State Theatre through January 10th. Tickets start at $39.