Blog - Latest News
You are here: Home1 / REVIEW: A Raisin in the Sun 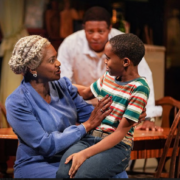 Lorraine Hansberry’s production of a Raisin in the Sun, does indeed explode on stage at the Gurthrie. The play’s title is inspired by Langston Hughes’ poem “Harlem” which asks “what happens to a dream deferred?”

This powerful performance of A Raisin in the Sun explores that question on many levels, and exposes the lighter and darker sides of human nature, which we all struggle with, and invites us to find compassion.

Raisin is the story of three generations of the Younger family, a working class African-American family living on the South side of Chicago, in a tiny apartment. The matriarch, Lena Younger, and her daughter-in law Ruth, work long and hard hours cleaning the homes of white families. Lena’s son Walter, is a chauffeur, his sister Beneatha, studying to be a doctor. And there’s Lena’s grandson Travis, whose bedroom is the couch, who begs to carry groceries after school, so he can earn some money for himself.

The family is no stranger to hard times; Lena remembers the desperation to flee the South, when surviving a lynching was all one can hope for. Lena wants a home and safety for her family, her children have bigger dreams, ones that she doesn’t understand. Her daughter wants more from her life than to simply marry well, her son wants to start a business with questionable background.

Long before the check arrives there are conversations on how to spend it. The audience learns that there are struggles in both having money, as well as not having it. The audience is also reminded that slavery was not that long ago, that discrimination remains rampant and flagrant, and hopefully that we are all the same underneath, and doing the best we can with the circumstances we face.

Yes, Raisin explores civil rights and racism, it also explores women’s rights, in a manner that both reflects the past and feels relevant to the present. There are times when the play is intense; there is also a lot of laughter, and the one thing that redeems us all – love.

A Raisin in the Sun is playing on the McGuire Proscenium Stage at the Guthrie Theater in Minneapolis, from April 30-June 5. Tickets start at $26.