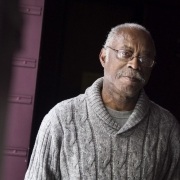 Acting Black is a one man show written and performed by Carlyle Brown that is one part presentation, one part open forum. The topic is about how black people have been portrayed in American entertainment for the past 200 years and how that portrayal shapes and affects modern day racism. The show is produced for a white audience, with the goal of educating and providing the missing context for many persistent stereotypes.

Starting with the origin of minstrel shows, and culminating with the modern day appropriations of black culture, Brown’s show highlights the ways in which the concept of race, and the ideas of “white” and “black,” were used to manipulate the fortunes of blacks as well as white. Acting Black describes itself as part-comedy, however, it is not a stand up routine. As Brown explains, he tells the story with a sense of humor, because the alternative is to scream and shout in a way that would fulfill the worst of the stereotypes. His performance is in itself a comment on the way blacks are perceived by even the most well-meaning white folks. And, from a Caucasian perspective, I would not say I found the show funny or laughable, at least not when you think about the number of people impacted by this ongoing issue, but it is certainly insightful and important.

Acting Black provides a wonderful opportunity receive a history lesson and dive into black perspectives in a time when tensions run high. As with other shows that have been produced in the area over the past few years–We Are Proud to Present…, The Parchman Hour, and A People’s History of the United States–Brown’s underlying message is that, race is a construct that was ultimately designed to divide people with much more in common than they realize in order to maintain control over both groups.

Brown uses the last half hour of the show to encourage members of the audience to talk with each other. Forced to confront our own internal reactions, and those of our peers, the realization that there is much more work to do comes swiftly and not without difficulty. This is not a problem that will go away in its own. But the sooner we all know our history, the better we can make our future.