Blog - Latest News
You are here: Home1 / REVIEW: An American in Paris 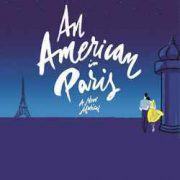 If you love dance, then don’t miss An American in Paris currently playing at the Ordway! Filled with ballet, tap, jazz and other dance styles reflecting the twentieth century, this musical entertains. An American in Paris is not a remake of the movie, but a new compilation of Gershwin songs with a love story between an American soldier and a young “mysterious” French woman set in postwar Paris. The story itself is secondary (and not always compelling) to the superb dancing and visual effects. The sets and lighting create stunning scenes, changing frequently without closing the curtains or “blackouts.” They manage these changes through “dancing” the set pieces off the stage, turning them, and lighting the scenery with rapidly changing projected images.

The character of Adam, played by Etai Benson, who narrates the play and is an important supporting character, was a strong and passionate presence, delivering both comic lines and pathos with conviction and skill. He made his character relatable and connected well with audience emotions. It would be a delight to see Etai Benson in a larger role.

All of the cast are extraordinary dancers and singers who perform well as an ensemble. At times, the well-rehearsed skills are not enough to draw the audience into the story, which seems to be more of a backdrop for the dancing and spectacular visuals, but it is an entertainment that satisfies.