Blog - Latest News
You are here: Home1 / REVIEW: An Officer and a Gentleman 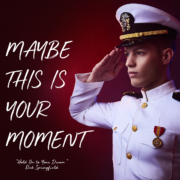 An Officer and A Gentleman lifts the Ordway in St. Paul up to a higher love! (I am a child of the 80s, can you tell?) Set in 1981, An Officer and a Gentleman is the story of Zach Mayo, a young man who wants to fly, who wants to escape the past, and has arrived at Officer Training for the US Navy with that as his mission.

Zach is physically in top form, but has much to learn about citizenship, friendship, and love. The storyline includes several strong supporting characters, and a score that is nostalgic, fun, and romantic. An Officer and a Gentleman also presents important issues such as sexism, racism, and the challenges that accompany servicemen, women, and their families.

Several of the numbers are physically challenging, and the ability of the cast to sing while doing calisthenics is impressive. The show flows nicely between dialogue and song, and the time passes quickly. The cast’s love for performing shines through, and the connection I felt to the characters was surprising. I left feeling deep gratitude for the privilege of spending the evening with people whose desire is to bring joy.

An Officer and a Gentleman is ultimately a love story, and a good one at that. The production runs from January 20-23, 2022, with ticket prices starting at $44. See it if you can; but be warned; you’ll be singing the 80s for the rest of the night (and perhaps longer)!