Blog - Latest News
You are here: Home1 / REVIEW: As You Like It 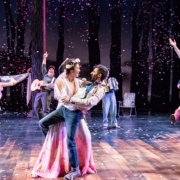 As You Like It is the Guthrie’s fresh, charming take on Shakespeare’s lightest comedy.  With four weddings, a wrestling match, multiple disguises, hapless shepherds, and all sorts of romantic mischief, there is plenty of merriment and gaiety to lighten the coldest, winter-hardened heart.  We’ve endured the Polar Vortex and record snowfalls this season, and given the weight of the news cycle, this is a production mercifully free of allegory or reference to the current political climate.  Instead, you are treated to a diverse and energetic cast of performers who bring the Bard’s verses to life with clever gestures and blocking to help clue those of us who are rusty on our 16th century vocab in on what’s happening.

As I suspect may be the case for many, I didn’t have HBO back in 2006 to catch Kenneth Branagh’s version (and sadly wasn’t alive in 1978 to catch Dame Helen Mirren’s), and this was my first time seeing it performed live, so I have nothing to compare it to, but I enjoyed it all the same.  As You Like It isn’t as well-known as some other comedies, so here’s a quick refresher, to help get you up to speed.  Many of the ideas on romance, courtship, gender identity, and role reversals and that feature prominently in Oscar Wilde’s Importance of Being Earnest–and are still relevant today–were first explored here, so if you like that sort of thing, this is your jam.

I found Lavina Jadhwani’s direction to be droll and lively, and the cabin-chic sets and costumes gave everything a cozy, neighborly feel that would be right at home in the North Loop.  The musical adaptations of the play’s songs were catchy and would be right at home on a taping of Live From Here. There’s no need for a hard sell on this, it’s easily one of the best nights you’ll have at the theater this season.