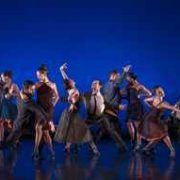 Ballet Hispanico’s performance last night was a blend of contemporary and ballet aesthetics set mostly to Spanish and Latin music, and influenced by Hispanic dance culture.  Disclaimer: none of these is a genre I know much about.  I do however have a lot of amateur dance experience, and as they say, “I know what I like.” One of the things I liked most about the performance was the lack of mechanical matching perfection. As admirable as that perfection and unison can be in the right place, Ballet Hispanico’s company exuded a different quality that I especially admire– celebrating different individual personalities expressed through body movement.  Although doing the same movement at the same time, yet each body moves in its own way.  Whether dancing a contemporary or ballet number, the dancers’ relaxed postures (and accomplished skill) made everything seem so easy and natural that it almost looked as if they were making some of it up on the spot. Sometimes I found the movement tended a little towards the sedate, especially coupled with the often high-energy music. But overall there was never a moment my attention wandered from trying to absorb everything that was happening on the stage.

The show comprises three very different acts or numbers. The first is a modern number, which was about “the nuances of a kiss”, and by extension, relationships: one-sided relationships, intimate relationships, social relationships, new relationships.  The most memorable segment was an all-male, contemporary pas de deux, which (though I am not a man) I found far more romantic than any man-woman pas de deux I’ve seen.  According to the program, the designer for the women’s costumes for this act is a well-known Venezuelan fashion designer, and the dresses were indeed interesting, beautiful, and edgy — in some cases so edgy they wouldn’t be street-wearable.  Unfortunately, said fashion designer only did the “costume styling” (not designing) for the men’s costumes, which seemed to result in the men being attired in basically workout gear and black socks.  I’ll admit, that costume dichotomy distracted me quite a bit. However, the monochromatic blue and black look of all the costumes together worked with the modern feel of the piece.  As the act proceeded I was amused by the comic touches, and became completely engrossed in the chaos of a dozen dancers executing diverging movements in twos or threes, then punctuated by the occasional unison move, or all the bodies falling into a perfect geometric shape.  Near the end of the number, with the unison crook of their arms and swivel of their hips, the company had me smiling uncontrollably with delight.

The message (if there was one) of second number was a lot more opaque to me – it seemed to be about men who were a little too emotionally attached to their bowler hats.  But hey, it’s a group of Latino (presumably) men dancing. Who cares what it’s about! Truly, the all-male segments were the highlights of the show.  This second act especially showcased the strength and unique quality of movement of this company.  The use of “smoke” and clever lighting effects also made this act stand out. At one point, a strong spotlight illuminates the dancers in colorful dress shirts in the foreground and creates a shadow of the dancers on the backdrop.  The effect, plus the perfectly executed movements of the dancers, creates the most intriguing image of the show.  Unfortunately, this “best visual moment” was coupled with the worst auditory moment —  the music at this moment is a combination of wood creaking, a woman’s whispery voice and a repeated short musical phrase as if played on the high notes of a piano. It was like nails on a chalkboard to me. Happily, I was able to mostly tune it out and just enjoy the stunning visual image created by the clever dancers, colorful costumes, and effective lighting.

Looking at the program, I thought I would enjoy the last act most as it was described as “a nightclub populated by virtuoso dancers” with “conga, rumba, mambo and cha cha” rhythyms.  However, I obviously forgot this was BALLET Hispanico, not BALLROOM Hispanico. The final act was, to me, a ballet in ballroom shoes. The costumes, especially for the women, were a little too evocative of West Side Story for me (read: trite), but they certainly were beautiful and colorful.  The dancing, especially isolated segments danced by the men, showed a few flashes of Latin ballroom feel, but other than an occasional lukewarm swivel of the hips, the women stuck to classical ballet poses, aerial splits, pointing their toes directly towards the sky, and just generally looking gorgeous.  Although I would have preferred a contemporary/ballroom music pairing rather than a ballet/ballroom music pairing, one thing I certainly did appreciate was the different aesthetic brought to the male dancer role. No stiff, melodramatic postures, pointed toes, or tight tights for these guys!

Overall, this was a unique and memorable show, due partly to the interesting blending of contemporary and ballet movement with Latin-influenced music and partly to the dramatic but simple staging and costuming.  And of course, those men.

Unfortunately, Ballet Hispanico was only in town for one night.  Click here to view upcoming dance performances at The Ordway.

This guest review was provided by Karen Cieminski.