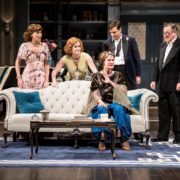 The Guthrie Theatre’s production of Blithe Spirit marks the second installment of a project exploring the theatrical community’s differing reactions to the conflagration spreading across Europe in 1941.  Whereas Watch on the Rhine (which ran at the Guthrie earlier this fall) was a serious, thoughtful drama exploring such lofty topics as resistance, loyalty, obligation, complicity, and sacrifice—Blithe Spirit charts a very different course.  Written in just five days during the German bombardment of London, Noël Coward’s drawing room comedy uses elements of the supernatural to poke fun at the concepts of love, marriage, and the true meaning of the vow “til death do us part.”  Set in the late 1930s, it avoids even the barest mention of the tumult that brought the world to the brink.

It’s hard to talk about the story without giving too much away, but Blithe Spirit is just as comfortable throwing around twenty-five cent words like “didactic,” “supercilious,” and “puerile,” as it is with sight gags and jokes about practitioners of the occult.  The first act starts off a little slowly, in order to set up all of the jokes that fill the second and third acts.  Running approximately two-and-a-half hours (nearing three after the intermission and act break in the second half) the Guthrie production delivers witty banter from the talented cast and impressive visual effects from the set designers and prop managers.  Quinn Mattfield makes his Guthrie debut with a charming performance as Charles Condomine that evokes Hugh Grant in his prime, and Guthrie veteran Sally Wingert steals the show from the moment she walks on stage.

It was fascinating to see this show on the heels of Watch on the Rhine.  Just as it was intended so many years ago, Blithe Spirit offers a delightful escape from the onslaught of the news cycle and allows the audience to laugh at clever wordplay and an absurd battle of wills.  With most showings of A Christmas Carol having already sold out, why not treat yourself to this hilarious other tale of spiritual visitation?