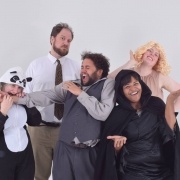 “Caucasian-Aggressive Pandas and Other Mulatto Tales” marks the triumphant return of a production by writer and performer Derek “Duck” Washington. The show was banned from the City of Burnsville in 2017 because the title contains the word “mulatto,” which the city thought some might find offensive.  Fortunately, the show found a new home just across the river in Bloomington.  Caucasian-Aggressive Pandas features a mixture of autobiographical sketches and fictional scenes that explore various aspects of the experience of growing up as a person of mixed race.  First produced in 2015 for the Minneapolis Fringe Festival, the show has been updated to reflect the changes in the seismic shift in the political climate since the 2016 presidential election.  The show is funny and poignant, aiming to open a dialogue with people of all backgrounds in a safe and welcoming environment.  The 70-minute show features an optional 30-minute discussion and Q&A session with the cast after each show.  It runs through June 24, 2018 at the beautiful Bloomington Center for the Arts.  Tickets are available here.

Late Night at the Riverview

Free screening: Guardians of the Galaxy 2
Scroll to top