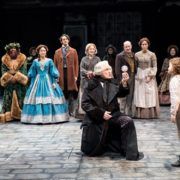 A heartwarming tale, woven by a master storyteller

Performed by an all-Twin Cities acting company on the Wurtele Thrust Stage, the Guthrie’s 43rd annual production of A Christmas Carol delivers a potent holiday cocktail of healing, redemption, and transformation. Under Lauren Keating’s deft direction, the familiar tale by Charles Dickens, adapted for the stage by Crispin Whittell, puts out enough wattage to thaw the frozen, captivate the jaded and convert first-timers to loyal patrons.

Striking performances abound. After a thrilling turn this year as Lear (alternating the role with Stephen Yoakam), Nathaniel Fuller embodies a compelling Scrooge on the same stage. Ansa Akyea plays Ghost of Christmas Present and a marvelous Bear; Aimee K. Bryant radiates warmth as Mrs. Fezziwig and disapproval as Bunty; John Catron rivets attention as Jacob Marley, and swings a mean turkey. Emily Gunyou Halaas, a hoot as Mrs. Dilber, contributes a lovely voice to the ensemble, while Charity Jones’s distinctive diction elevates the proceedings, and inspires an urge to treat oneself to a Christmas Carol in which Ms. Jones performs as Ebenezer Scrooge (Nov 26 at 7 PM; Nov 30 at 10:30 AM; Dec 6 at 7:30 PM; Dec 13 at 10:30 AM). Kris L. Nelson and Meghan Kreidler are the Cratchits, and Eric Sharp appears in four roles, including Ghost of Christmas Future. Finally, RyanColbert is an endearing, good-natured Fred, and turns in some of the most elegant, coattail-flying partnering seen on a Twin Cities stage in many a year.

The production strikes a pleasing balance between tasteful spectacle and restrained pathos, clocking-in at two hours, including one intermission.

A Christmas Carol is at The Guthrie through December 30, 2017. Tickets start at $29 and prices increase as it gets closer to Christmas.

DEAL ALERT: Click here for details on how to score rush tickets!

Donation yoga this Thanksgiving at CorePower

WIN TICKETS: The Elephant in the Room
Scroll to top