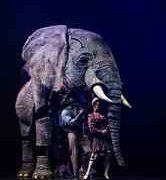 Awe. Wonder. Joy.  At it’s height, the circus was a place where people could go to escape from the grinding struggles of the Industrial Revolution and the mass migrations from rural villages to the teeming, grimy, turn-of-the-century metropolises.  Before the internet, television, and even radio, the spectacle contained within the canvas walls of the big top offered people a glimpse of things most would find beyond their wildest imaginations.  It was a place of magic. 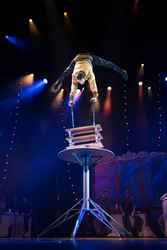 People of my generation, by contrast, have a much more jaded view of the circus.  We cringe at the idea of hucksters selling tickets to watch majestic animals crammed into tiny cages and people gawking at so-called “freaks.”  The circus in its modern incarnation fares little better in our minds.  This likely explains the demise of the Ringling Bros. circus earlier this year.  After years of slumping ticket sales, the removal of elephants from the show only hastened its decline, making clear that exploitation was the only thing propping up the candy-striped tent at this point.

But what if you could remove the elements of animal cruelty and bring the focus back to the awe-inspiring feats of human strength, creativity, and daring?  What if you could replace the long-suffering pachyderms with amazing, life-size puppets that lumber across the stage with uncanny realism?  Circus 1903: The Golden Age of Circus! answers those questions with a show featuring performers from around the world and elephants brought to life by the puppeteers behind the criticaly-acclaimed Warhorse.

While we’ve seen no shortage of productions featuring people doing amazing things in the past 20 years, companies like Cirque du Soleil have fully mined the shtick of spandex, pantomime, and gibberish that seemed so innovative after decades of circus cliches.  Calling back to the core of what circuses were meant to be–even if it never truly existed–Circus 1903 delivers a welcome departure that sensed an opportunity to reconnect with audiences at just the right time.

I really enjoyed the show, but what made it transcend my expectations was watching it with my three-year-old daughter.  Seeing her face light up as she marveled at the performances–and the building anticipation of when she’d get to see the elephants–helped bring me back to the time in my life when I couldn’t just tap a few buttons on a black rectangle in my pocket and see everything anyone ever did.  Seeing this performed live, with the risks and challenges made strikingly clear, is crucial to in the era of CGI and digital animation because we forget the incredible things that real people are capable of doing.  As the ringleader so aptly put it during a piece in the second act, making a room full of strangers happy all at once is a kind of magic all its own.  I, for one, think we could all use a little more magic in our lives right now.

Circus 1903 is in town for just three days in St. Paul before it leaves for Las Vegas, where it will run through Christmas.  This is a show for all ages, but I think it is best seen with a kid in tow.  So grab your tickets, ditch the babysitter, and ignore bedtime (you won’t even get back that late if you don’t live too far from St. Paul).  The circus awaits!

DEAL ALERT: Some discount tickets can be found via this link.