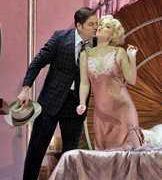 And the party goes on … Manhattan socialite Millicent Jordan plans the perfect dinner party, but as her guests arrive, business intrigues and romantic entanglements are brought to light in this dark comedy. Dinner at Eight is a winning new work that charmingly weds American musical theater and opera.

Courtesy of Minnesota Opera’s commitment to new work, Dinner at Eight is a world premiere production based on a play from the 1930s by George S. Kaufman and Edna Ferber. Mark Campbell has written the witty and well-chosen words; William Bolcom, winner of Grammy and Pulitzer Prizes, composed the music.

Lighting design (Robert Wierzel), including projections, transports us to Depression-era New York City, where we encounter handsomely-costumed (Victoria Tzykun) characters on their way up and down the social ladder. Ingenious set pieces (Alexander Dodge) move the action from drawing room to boudoir and around town, and create memorable visuals. Because I attended a dress rehearsal, voices and characterizations were strong, but singers weren’t necessarily cutting loose at all times. Nevertheless, my appetite for the real deal was definitely whetted.

I found the production’s design elements to be especially notable. From the moment I entered the Ordway Music Theater, subtly lit and textured imagery on the curtainless stage drew my eye, and compelling visuals continued to materialize throughout the two-hour (including intermission) evening. The creative team selected a color palette that is more subdued than flashy, but within that range, the color choices are skillful and create an immersive ambiance. The effect for me was to be drawn effortlessly into the world of the play, which was quite a treat.

Another reason to put Dinner at Eight on your radar is the opportunity to witness the art and adventure of creating new work. Minnesota Opera has a decades-long history of project development, and Dinner at Eight is their 44th new project – or 45th, depending on who’s counting. The element of novelty and unpredictability definitely livens up the proceedings!

Third Thursday: At Home with Monsters

Pint of Music
Scroll to top