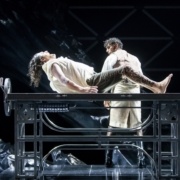 Mary Wollstonecraft Shelley published the first edition of her masterpiece novel, Frankenstein: or, The Modern Prometheus in January 1818.  Celebrating the two hundredth anniversary of this modern legend, the Guthrie Theater has revived an adaptation of the story by the playwright Barbara Field that it first produced thirty years ago.  Frankenstein: Playing with Fire is an examination and exploration of Shelley’s original story that hones in on the themes that are at the essence of humanity’s quest for knowledge and power over the world we inhabit.  What does it mean to be alive?  Where does morality come from?  Do we have a duty to pursue scientific advances at all costs, and if so, who bears the responsibility if things go awry?  These and many other questions are brought to the fore with alacrity and pathos as Frankenstein and his Creature revisit the events that brought them to a frozen glacier at the top of the world.

Where Shelley’s original work is at times plodding, verbose, and laden with irrelevant minutiae, Field’s script cuts the chaff and Rob Melrose’s direction keeps the story to just over two hours, plus an intermission.  The play tells the story by interweaving a final showdown between creator and creation with flashbacks that show Victor’s ambitious rise through university, his reckless pursuit of scientific achievement that culminates in bringing the Creature to life, the destruction wrought by his folly, and the surprising morality possessed by the thing he and all of humanity deems a monstrosity.  The acting is superb; the blocking is dynamic and full of energy, yet you can feel the weight of time on the two rivals as they seek answers to the questions that have defined their existence for so many years.

Frankenstein and his “monster” have maintained a unique fascination in popular culture over the past two centuries because they force us to examine what it means to be a monster, a villain.  As Prometheus was the god who first brought fire to humanity, so “Playing with Fire” is a reference to the responsibility that comes with such power.  The irony, of course, is that Frankenstein is the true monster, who abandoned his creation to the cruelties of the world, while the Creature seeks only to be loved, accepted for who he is.  Frankenstein lives on because it is the lens through which we observe and measure ourselves.

The Guthrie’s production of Frankenstein: Playing with Fire runs through October 27. Tickets start at $29. Click here for rush ticket information.

WIN TICKETS: Writers Go To The Movies
Scroll to top