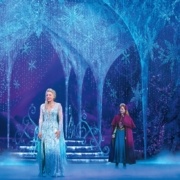 Broadway is back in Minneapolis!! Frozen: The Musical is a magical and spectacular gem – a must see show for anyone who really appreciates a little magic! The musical stage adaptation of the Disney film follows the movie storyline, with a few scenes that were added or embellished to extend the run time, but the transitions between magic, drama, and action will keep you completely immersed the entire time.  Even the young children I observed were mesmerized throughout the 2+ hour performance and anyone who has young children these days will appreciate what a feat that is.  The show is funny and intense at times, with plenty of jokes for adults and children alike.  I’ve never been one to pay much attention to what the performers wear on stage, but the brilliant costumes in this show really stood out to me and were no doubt captivating to the show’s young audience, many of whom came adorned in their own adorable costumes.

Like with most other Disney adaptations, this is not your typical movie musical cash grab, as the quality of the production was absolutely suburb.  Every aspect of the show was what you’d expect from a headline show on Broadway.  Music, performance, sets, lighting, costumes, and incredible special effects–all were world class.  Going in, I mainly looked forward to taking an eight-year-old for her enjoyment after nearly two years without seeing a live performance, but found myself loving the show perhaps even more than she did.  There were multiple special and technical effects that made me audibly gasp.  Every scene received robust applause, but the hit “Let it Go” song seemed to thrust the audience out of their seats with a roar of cheers and applause.

Like many people, this was my first time in a theater in nearly two years, and what made the experience particularly enjoyable for me were the strict COVID-19 safety precautions taken by the theatre that were actively enforced.  I questioned whether it might be too soon to attend a show in person, but their policies (along with my KN95 mask and vaccination) put me at ease. For a complete list of restrictions and requirements, please see the policy here.

The show runs through October 20, 2021 at the Orpheum Theatre in Minneapolis.  Tickets start at $40.