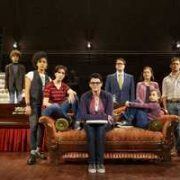 After seeing White Christmas on Saturday, Fun Home was a complete 180-degree turn that I’m not sure I liked.  Fun Home tells us about a “real” place by exploring some dark themes.  At its core, it’s about imperfect people and imperfect families.  Although largely set in a funeral home, it’s not macabre, just suffocating.

Fun Home is a musical, but the music did little for me.  I recognize that my opinion is outweighed by its 2015 Tony award for best original score, but I believe the story could be told just as well, if not better, as a play.  I will point out that the acting was phenomenal; Abby Corrigan couldn’t have been better in her role as college-age Alison.  Her performance of “Changing My Major” was a major highlight of the show that made me laugh and brought a beaming smile to my face.  It was the intended raw performance with the most lighthearted and vibrant tone.

There’s no question that life is more complex for lesbians and gays, but Fun Home makes sure to drive the point home.  It claims to be relatable, but even as an ally, I had trouble getting into the story and applying its themes to my own experiences.  To put it plainly, I just wasn’t in the mood for a serious examination of a troubled family right before the holidays.  If you’re looking for an escape from the emotional meat grinder of 2016, you won’t find it here.  Those who are ready to dive into an intense, tumultuous, fraught, and dysfunctional family drama will be quite satisfied.

DEAL ALERT: Student and Educator Rush Tickets are available for all performances! 2 tickets per valid student or educator ID. $25 per ticket, cash only. Available at the box office two hours prior to showtime. Subject to availability.