Blog - Latest News
You are here: Home1 / REVIEW: Getting Plowed 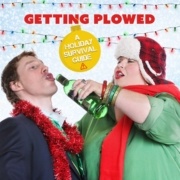 Getting Plowed is the Brave New Workshop’s 61st(!) holiday show.  With all-new, but comfortingly familiar material skewering holiday tropes like burnout, letters to Santa, and family dysfunction, it’s great catharsis to know you’re not alone in feeling like the holidays are getting more stressful.  The pacing is snappy and moves things along at a pretty good pace, although some could still be tighter.  I was surprised that they didn’t bring back any skits from prior years (at least none that I recognized from the past five years or so).  There aren’t as many Minnesota-specific jokes as a “regular season” show, but they still land a few, like shopping at Target and one particular outer ring suburb that was a punchline in itself.  Most themes are timeless, with a few modern touches including an entire parody ode to that poolside favorite–White Claw.

Perhaps my only hesitation in a full-throated recommendation would be if you, or someone you care about, has an unhealthy relationship with alcohol.  As the title Getting Plowed suggests, a common theme throughout the production is intoxication, which can certainly be hilarious, but not to everyone.  Alcohol and comedy are peas in a pod, and I’m not saying they need to change the show in any way, just pointing out what should likely come as no surprise.

PRO TIP: The last show on weekend evenings includes a free improv bonus show, so pace yourself at the new self-serve bodega-style bar area so you’re ready for all the hilarity.

Getting Plowed is at the Brave New Workshop Comedy Theater through January 4, 2020.