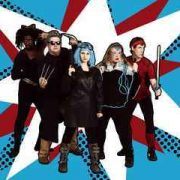 Back in the early 1960s, Dudley Riggs founded The Brave New Workshop as a place to showcase topical, political satire in the heart of the land of 10,000 lakes.  Through the Viet Nam conflict, Watergate, the Starr Report, and the War on Terror, BNW has brought raucous laughter and scathing mirth by dissecting and examining the antics of Washington, D.C. and St. Paul through a funhouse mirror.  BNW’s latest production is Guardians of the Fallacy: Executive Disorder, a view of America in the age of alternative facts.  After a much-needed six-month politics break following the election and Trump’s Electoral College victory, Guardians of the Fallacy is a Trump-bashing feast.  Although I am no fan of the current occupant of the White House, I had a difficult time laughing at skits relating to healthcare, Putin, and Trump’s 4 AM tweets; not because they weren’t spot-on reflections of the current political climate, but because things are so absurd, there’s not a lot of room left for satire.

Although I always have a good time watching the immensely talented cast, BNW has been dealt a difficult hand, similar to that faced by Netflix’s House of Cards.  Remember when it was deliciously insidious to watch the amoral Frank Underwood connive and betray his way into the Oval Office in a cynical mashup of The West Wing and Dark Mirror?  We’re now at a point where the crazy and unbelievable happens every day.  I can’t imagine how difficult it is to write and produce an outlandish script with caricatures of characters, only to have the president framing photoshopped copies of himself on the cover of Time Magazine and unironically hanging them at his resort properties.  Or retweeting videos from his appearance on WrestleMania with his opponent’s head replaced with the logo for CNN.  Did you read the news yesterday?  Literally while we were at the show, President Trump proposed working together with Russia on our nation’s cyber security and his daughter, Ivanka, sat in for him at the G-20 summit in Hamburg because he had other places to be.  These headlines are what I would expect for skit themes from BNW, but they are all too real.

And that’s the show’s biggest obstacle: in order for the writers to put together a Trump-themed comedy show, they have to take it to a whole other level.  Instead, they seemed to stick with the sort of safe, soft satire comedy you might expect from one of the late-night Jimmys.  Usually, show director Caleb McEwen pumps up the crowd with his standard, winking trigger warning, “Are you ready to possibly be deeply offended?”  That question was conspicuously absent on Saturday, and whether that was accidental or intentional, it encapsulated my experience.  Political comedy is supposed to carve up sacred cows and serve them rare and juicy or burned to a crisp, helping us examine our views in a new way.  The show was neither offensive nor overly-coddling: sure there were laughs, and people seemed to be having a great time, but no new ground was broken.  Although the show title is a riff on superhero movies and comics, those fertile tracts were also perplexingly left unplowed.  Approximately 75% of the sketches were politically-themed, while the other 25% were non-political (or at least not Trump-related); these ended up being my favorite parts of the evening.  Watching Lauren Anderson doing battle as a Viking shield maiden brought a laugh that was pure as compared to the nervous laughs that from bits that were just too close to reality to allow myself to genuinely find the situation comical.

The show runs now through October 28.  As they often do, it’s possible some of the sketches will be re-written or adapted to reflect changes in the political landscape.  I would be surprised if the shows running as the leaves turn the color of the president’s favorite bronzer are the same as the one we saw over the weekend.  Either way, you’ll have a good time—just don’t be surprised if you drive home with your sacred cows roughed up a little, but otherwise mooing contentedly in the back seat.