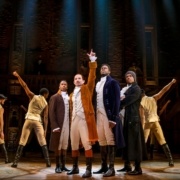 Hamilton. The musical about America’s founding father, Alexander Hamilton, told through a mix of rap and song, won a gazillion awards (11 Tonys, 7 Oliviers, a Grammy, a freaking Pulitzer!) and is the hottest ticket in the country. Does the National Tour live up to the Broadway hype? Is this a show worth the ticket price? Yes and yes!

Obviously, I walked into Hamilton with high expectations. I mean, I know people who flew across the country just to attend a performance in New York or Chicago.  But after listening to the soundtrack on Spotify a few times, I couldn’t quite identify how it was going to live up to  all the hype.  I couldn’t shake the impression that a lot of praise was for Lin-Manuel Miranda’s revolutionary approach to historical story-telling blending elements of hip-hop and rap into numbers performed by a super-diverse cast.

Although all of these aspects are worthy of praise–and a critical part of Hamilton‘s success–the cast recording fails to convey many of the other aspects that make Hamilton such a treat to experience in person. For one, the cast is fully aware of their responsibility to ticket holders. I have never witnessed such energy and commitment to giving the audience their very best performance each and every night. Oftentimes, for the national touring shows that make their way to the Twin Cities, I find myself wishing the actors would dig a little deeper and deliver on the various emotional moments in the show. Not so with Hamilton. There are so many opportunities for the actors to shine and there was not one when in which I felt the performers were going through the motions. The energy it takes to perform this show is simply incredible. The cast recording simply cannot replicate the booming orchestra, the sweat flying, the vibrant choreography and dynamic blocking on stage, and the powerful emotion expressed through the actors’ every facial twitch.

A particular standout was Nik Walker as Aaron Burr. I became completely obsessed with him from the moment he stepped on stage, but it was his performance of the song “Wait for It” that struck me in the deepest part of my brain and refuses to let go. Listening to the Broadway cast recording, it doesn’t remotely live up to last night’s performance.  I keep talking about the cast recording because this is how the vast majority of America/the world has experienced this phenomenon and it kills me.  For most shows, the Broadway recording is often the ideal, with performers who defined the role setting the bar for everyone else.  Despite winning a Grammy for the recording, the Hamilton recording is barely a shadow of the live show, which means that only a tiny fraction of people will get to experience how truly remarkable this show is.  In another important role, Joseph Morales plays Alexander Hamilton. If you are at all disappointed that Lin-Manuel Miranda bowed out and isn’t on the tour, don’t be. Joseph stands should-to-shoulder with this giant (literally, as they are both among the shortest members of the cast, and figuratively, because their presence on stage is undeniable).

As indicated above, Hamilton is one hot ticket and, as such, it’s nearly impossible to obtain tickets for any seat during its six-week run. Unless you’re able to shell out big bucks for resale tickets (which can approach the size of the national debt), the SUPER AMAZING TICKET LOTTERY is your best bet.

Hamilton is at the Orpheum Theatre in Minneapolis through October 7, 2018.

Free yoga at The Draft Horse