Blog - Latest News
You are here: Home1 / REVIEW: How the Grinch Stole Christmas 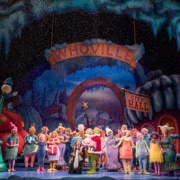 With the Christmas season arriving earlier and earlier,* it’s nice to have the chance to give kids an opportunity to focus on something with a message that isn’t about presents and wish lists.  While the Guthrie has its old standby, A Christmas Carol, most will admit that it’s not the most kid-friendly show (particularly in the third act!).   Fortunately, there’s a perfect alternative nearby, and you don’t even have to cross the river!

For most of us, the story of the Grinch is as cemented in our minds as Rudolph and Frosty. As far as these things go, it’s pretty difficult to compete with the sheer economy of Chuck Jones’s 1966 television adaptation of Dr. Seuss’s anti-consumerist holiday masterpiece, How the Grinch Stole Christmas!.  I remember it being longer, but Jones managed to distill Seuss’s storybook into just 26 minutes to make it fit the restraints of commercial television.  There have been other attempts over the years to update this classic tale, or adapt it into a feature-length film, with rather mixed results.  The Children’s Theatre Company was the first, however, to translate the book and TV special into a musical theater production.  So how does one turn a quaint morality tale into a full-on musical extravaganza without losing sight of the original message?  Simply put: love.

I know what you’re thinking, but hear me out.   Targeting an audience of kids–and their grown-ups–HTGSC! manages to walk the fine line between gratification and overindulgence.  At just under 2 hours (intermission included), the stage production of HTGSC! is four times longer than the original cartoon.  There’s a bit more narration due to the introduction of Max the Dog as the narrator, who tells the story as a sort of extended flashback.  Most of the additional time is filled with musical numbers.  The songs are fairly innocuous, if uninspired, but they’re charming enough to avoid being overly grating.  Obviously, it’s difficult to find a baritone to match the bass resonance of Thurl Ravenscroft (the original voice of the song you’ve been humming in your head for the last eight minutes), but the kids don’t seem to mind. The energy and dedication of the cast really shines through.  While a lot of shows bring enthusiastic performers, it’s amazing to see all the main characters line up after the show to sign autographs and take pictures with huge smiles and high fives for as long as there’s a kid in line.

The production values, too, are through the roof, as befits an annual production nearing its 25th season.  This somewhat justifies the eye-watering price tag for a package of tickets.  While there are seats available for as low as $15, the vast majority of seats cost between $55 and $75, with a $10 discount for those 17 and younger.  By comparison, tickets for A Christmas Carol at the Guthrie range between $29 and $134).

DEAL ALERT: Score 20% off discounted tickets via this link, or use coupon code INFLUENCER

How the Grinch Stole Christmas is at the UnitedHealth Group Stage at the Minneapolis Institute of Art through January 6, 2019.

*I have come to accept the fact that, the minute that Target puts all of the leftover Halloween costumes on clearance also marks the official start of the Christmas season.  For those old school folks who want to argue that there’s still Thanksgiving, I think we can all agree that it’s basically been relegated to “practice Christmas” status by this point.

WIN TICKETS: Angels We Have Heard Are High
Scroll to top