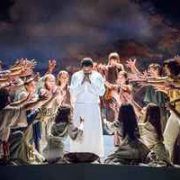 Jesus Christ, Ordway Performers Have the Voices of Angels!

Some people wait their entire lives for the opportunity to make an AP Stylebook headline joke; you could say that today is my day thanks to Jesus Christ, Superstar.  Headline puns aside, the stirring music by Andrew Lloyd Webber provides moment after moment for the singers to shine in this musical interpretation about the adult life of a carpenter from Nazareth.  I could tell the audience–including myself–could barely resist jumping to its feet after “Gethsemane,” a performance by Jesse Nager that I wish I could have heard 10 times that evening, as it may very well have been the best performance of a song I’ve ever seen in my life.  Hometown hero, Randy Schmeling, also provided a stellar performance in the prominent role of Judas Iscariot.

Most of the show seemed “traditional” in its story telling and production. Although I’m not at all religious, it’s pretty difficult to escape the life story of the most prominent religious figure in America.  Some attempts were made to spice up this 1970s-era rock opera, such as the Ordway’s decision to cast a woman (Erin Schwab) as King Herod.  My first instinct was to groan at this as a gimmicky attempt to further gender diversity.  Boy, I was wrong!  Erin completely nailed the role and I wouldn’t want to see that character played any other way. I only wish they could have found more ways to tweak the production to provide a bit more surprise and interest.

All that said, it was a fantastic show.  I wasn’t a huge fan of the material going in, but I thoroughly enjoyed the music and the singing of all those angels on stage.

Jesus Christ Superstar is at The Ordway through July 20, 2017.