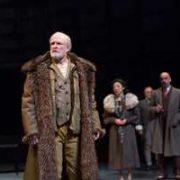 King Lear is of the most complex and emotionally wrenching works in the Shakespearean canon. Combining two intertwining plots of intrigue, betrayal, devotion, loss, and redemption, Lear gives audiences a lot to keep track of. The Guthrie’s production is a mixed bag. The action appears to take place in pre-war era England—which is only discernible from the actors’ Downton Abbey-style costumes. While some adaptations try to set the events in a specific time or place in order to make a political point (think Jean Anouilh’s Antigone) or give the production a unique flavor (as in Akira Kirosawa’s epic masterpiece Ran), Joseph Haj’s version of Lear doesn’t appear to have any underlying message, which isn’t necessarily a shortcoming in our overly-politicized times. Using color-blind casting, a friend of mine noted, “The actors look like America.” Indeed, the diversity of the cast extends to their performances, which ranged from wry and exuberant to wooden and listless.

Stealing the show was the brash, scene-chewing Edmund, played with relish by Thomas Brazzle in his Guthrie debut (I’m certain we’ll be seeing more from him in the years to come). Brazzle gave his Edmund a crisp, urban touch that felt fresh and now. It was also a delight to see Armin Shimmerman (from TV’s Star Trek: Deep Space Nine) as The Fool. The same could not, unfortunately, be said for most of others in the cast. I was rather disappointed in Nathaniel Fuller’s take on the title role, however, which lacked the depth and pathos that allow audiences to connect with the sense of loss and heartache that send Lear into madness. This, too, goes for Lear’s daughters, none of whom seemed comfortable in their roles.

Perhaps what was the most challenging aspect of the production for me was the difficulty I had in hearing the performers. This wasn’t a problem at A Christmas Carol, but there the actors were all mic’d. Without microphones, the audience is subject to a sort of acoustical lottery where you can only hear if the actors are facing your direction. Even then, the dialogue moved so fast that, even though I’d re-read it before the show, it was a constant struggle to keep up. I recognize that, at 150 minutes, this is already a long show, but better to take the time and ensure that the actors can convey the wrenching, emotional payload, and sly, subtle wordplay that is so cleverly wrapped into the same drama. King Lear is probably my favorite of Shakespeare’s works and, despite its flaws, the Guthrie’s production is still worth seeing.

King Lear is at the Guthrie Theater in Minneapolis through April 2, 2017. Tickets start at $29.

REVIEW: We Are Proud to Present
Scroll to top