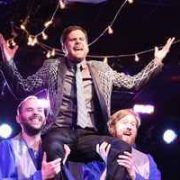 Leap of Faith is a musical adaptation of the film that starred the legendary Steve Martin.  It’s the tale of a con man, Jonas, who travels from city to city, inspiring each city’s residents to believe in miracles as proved by their financial donations.  When Jonas’s bus breaks down in the county of a sheriff who sees Jonas for who is he is, a bit of drama ensues.  Part of that drama is Jonas and the sheriff falling in love for no ascertainable reason in typical Hollywood fashion.  That love proves troublesome for both the sheriff’s conflicting desire to get Jonas out of town and also for Jonas’ inclination to use the sheriff’s wheelchair-bound son as bait for reeling in the town’s money.

You could say it took a leap of faith to see a show where the lead actor needs to fill Steve Martin’s shoes, but this one paid off.  Jonas is played by Matt Tatone, who was as spectacular as his rhinestone-bedazzled jacket.  It’s a high-energy role that requires a lot of gusto and emotional depth throughout the entire performance and Matt pulled it off.  I’m not sure how much Red Bull he had to down before each scene, but I was thoroughly impressed and sympathetically exhausted for Matt.  Of course neither Jonas, nor Matt, can pull off their respective shows alone, and a cast of delightful characters lend their support.  Leap of Faith taps gospel singer Sonya Nolen-Moon to add some authentic soul.  She’s the real deal and casts a strong shadow on the chorus of gospel singers off to the side who offered some unrequired support.

Leap of Faith is at the New Century Theatre through May 22, 2016.  Tickets start at $25.  But be sure to take note of pay-what-you-can night on May 9th!  Student and senior discounts are also available.  Call the box office to inquire.