Blog - Latest News
You are here: Home1 / REVIEW: The Lion in Winter 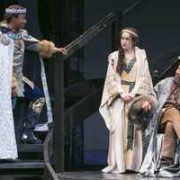 The Lion in Winter explores relationships among family members, in this case the king and queen of England and their sons during the Christmas holidays of 1183.  At stake is not only who will ascend to the throne, but “mom always liked you best” sibling rivalry.  Played for comic effect as well as reflecting on familial love and affection, this play evokes laughter and poignant nostalgia.

From the moment the curtain opened and actors walked onto the set amid continuously falling snow and rafters filled with candles, The Lion in Winter was a sparkling success! Attention to details, from the sound of drumming to build suspense, to spotlighting that was expertly timed supported the excellent cast in delivering an entertaining and thoughtful play. This play relies on being able to hear the speeches clearly, and the sound quality was fine, and the actors’ comic timing was right on. I can’t say enough about how the seemingly simple set created visual layering and provided the feeling of an active residence, as it turned to reveal a bedroom, a throne room, or a dungeon. The Lion in Winter is a delightful experience whose themes may start an interesting holiday dinner conversation among those who have seen it!

DEAL ALERT: Be sure to check out The Guthrie’s 30 Below program and their Rush Ticket Program for discount ticket opportunities