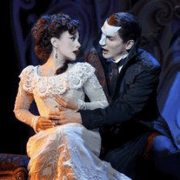 Have audiences somewhere been clamoring for a musical rendition of The Taming of the Shrew, set in the universe of The Phantom of the Opera?  If so, Love Never Dies is the wholly unnecessary sequel to Andrew Lloyd Webber’s musical phenomenon.  The original Phantom is still touring, so this show is little more than a naked cash-grab meant to run in cities during the interlude until the original comes back on tour.  I can’t imagine this musical making it to Broadway—let alone touring—if it had to stand on its own merits.  Alternate title #1: Greed Never Dies?

Set ten years after the Phantom so mysteriously vanished from a Paris opera house, Love Never Dies takes us to the Coney Island carnival era.  The costumes and set design excel at taking the audience to a dark and mysterious place. Even with the spoon-fed plot exposition, the convoluted story is very difficult to follow.  From what I gathered, the Phantom left Europe and has found a home among circus “freaks.” Whether he joined them or they joined him is unclear, as they seem to know each other at certain points in the show, but are an entirely disjointed–ahem–sideshow for most of the story.  The Phantom somehow manages to lures his love obsession, Christine, to Coney Island (where there is apparently a world-class opera house among the two-bit carnival tents) to sing a piece he has written, in an attempt to win her back.  I still can’t fathom why Christine would have any interest in the man who stalked her as a teen, terrorized and killed her co-workers, seduced and ultimately kidnapped her back in Paris.  Alternate title #2: Stockholm Syndrome Never Dies?

Having escaped from the Phantom’s lair at the end of the last story, Christine is now with Raoul and they are raising a son together.  There isn’t much evidence of an unhappy relationship, but Raoul and the Phantom get in a fight over Christine and decide to make a bet.  If Christine sings the Phantom’s new song (as she is contractually obligated to do), Raoul must disappear; if Christine refuses to perform, the Phantom will pay off Raoul’s gambling debts.  Each tries to influence Christine without indicating the terms of the bet. Sorry Christine, your personal happiness is irrelevant; you’re still just a thing for guys to fight over. Alternate title #3: Misogyny Never Dies?

The pivotal moment of the story is when the audience finds out whether she sings the piece or chooses to defy the Phantom.  This song, [spoiler alert] “Love Never Dies,” is the best in the show, which consists mostly of mediocre new material and a few throwbacks to the original—if only to remind the audience that Webber and Cameron Mackintosh knew what they were doing once upon a time.  In reality, to hang everything on this moment is ridiculous. The Phantom is a manipulative sociopath and it is never clear why Raoul, gambling debts or not, would go along with this bet. At one point in time, maybe the Phantom was a sympathetic, if misguided, character, but the culture has moved on quite a bit since then.  I don’t think the idea of this show was meant as a commentary on toxic masculinity or the lack of agency in female protagonists in popular culture, but that’s about where it ends up.

The performers do their best with the outlandish script they were given.  I found that Gardar Thor Cortes’s performance as the Phantom was a bit robotic, but his voice was strong.  Meghan Picerno really nailed the classic, Andrew Lloyd Webber operatic style in her performance of “Love Never Dies.” Given all of the other issues, however, it was merely a lovely performance in a show that has no other reason for existence.  At least the costumes and set are glorious eye candy.

Love Never Dies is at the Orpehum Theater in Minneapolis through July 1, 2018. Tickets start at $44.

DEAL ALERT: Student/Educator rush tickets are available for all performances.
2 tickets per valid student or educator ID. $25 per ticket, cash only. Available at the box office two hours prior to showtime. Subject to availability.

Evenings at the Bakken: Wine Demystified
Scroll to top