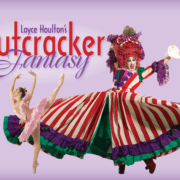 The first questions that may come to mind upon hearing about Loyce Houlton’s Nutcracker Fantasy might be, “Who is Loyce Houlton?” and “How is this different from the ‘regular’ Nutcracker?”  As someone who’s daughter prefers ballet of the aquatic persuasion, and is thus not steeped in the world of terrestrial dance (my term), it wasn’t readily apparent to me that Loyce Houlton was an internationally recognized pioneer in dance choreography who happened to be based here in Minnesota.  Born in Proctor, Minnesota, Loyce Johnson started dancing from an early age. She studied dance in college, earning a B.A. from Carleton College before going on to earn a masters in dance education from NYU.  After studying under dance icons Martha Graham and George Balanchine, among others, she went on to found what became the Minnesota Dance Theatre in 1962.

While most people are familiar with The Nutcracker ballet that Balanchine first staged in New York in 1954, Houlton choreographed her own version of Peter Ilyich Tchaikovsky’s ballet, renaming it The Nutcracker Fantasy in the process.  This production has become the longest running annual production in Minnesota, providing a showcase for exceptional dancers from around the region.  Houlton takes some liberties with the original story (E.T.A. Hoffman’s The Nutcracker and the Mouse King) that had me scratching my head, particularly during the first act, but the story is obviously secondary to the elaborate dance routines.  Houlton does an excellent job of incorporating multiple levels of dancers into many routines, from the littlest kids playing the adorable chubby mice to the stellar performers from around the country who turn the second act into a series of captivating solos and duets.

Where those familiar with the Balanchine production might expect some elaborate fairytale castle or candy wonderland, Houlton dispenses with all but the most minimalist designs, at times clearing the stage of all but a black scrim, the better to focus on the dancers’ form and graceful lines.  As a showcase for the art of ballet, Loyce Houlton’s Nutcracker Fantasy is a standout opportunity to see a range of dancers performing at their peak.  While some elements of the story are sacrificed to this, there is no shortage of spectacle to keep even the youngest audience members captivated during the two-plus hour runtime.

Things got off to a bit of a late start on Friday, with some hiccups in the screening process slowing things down at least 15 minutes (they ran out of vaccine/test verification wristbands by 7:10–although abandoning those probably helped move things along faster).  Like with other theaters managed by Hennepin Theater Trust, proof of COVID-19 vaccination or a recent negative test is required for admission to the show.  Even if they don’t have such issues in the future, for those considering bringing little ones to the show, the matinee performances are probably all the more desirable, as even if the 7:30 show starts on time, it doesn’t end until just before 10pm.  Tickets are still available, with prices ranging from $19 to $80.  Visit hennepintheatretrust.org for more details.

DEAL ALERT: Coupon code HOLIDAY50 will save you 50% on tickets.

WIN TICKETS: King of the Court
Scroll to top