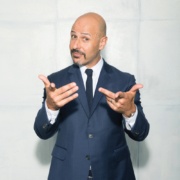 Saint Paul is known for many things: it’s the home of the Wabasha Caves, Charles Schulz, and the Red Bull Crashed Ice tournament.  It’s not known, however, for it’s stand-up comedy scene.  That may be about to change thanks to the Ordway, which is bringing live comedy to its Concert Series, beginning with the pioneering comedian Maz Jobrani.  Although most folks around here will recognize him from his regular panel appearances on NPR’s Wait, Wait, Don’t Tell Me! comedy news quiz, Jobrani was one of the original members of the Axis of Evil Comedy Tour from way back in 2005.  He also has a number of comedy specials Netflix, including Brown and Friendly, I Come In Peace, and most recently, I’m Not A Terrorist, But I’ve Played One on TV.

Opening for Maz was the truly funny local comedian, Miss Shannan.  A self-proclaimed geek, her act was personal and razor sharp.  I really hope to see more of her around town because she was absolutely hilarious.

Maz Jobrani’s act features a mixture of political and social insights shaped by his family’s immigration to the United States from Iran during the early 1980s.  While he’s not the first comedian make light of growing up in America with “embarrassing immigrant parents” (see Master of None, My Big Fat Greek Wedding, etc.), he may be among the few to have survived through both the Iran Hostage Crisis and 9/11.  As he wove stories from his past into bits about raising children in modern-day America, Jobrani’s comedy reminds us that this is a land made up of people just trying to give their kids a better, even if that means sitting through soccer games in sweltering heat or coming up with bizarrely specific costumes for random school celebrations.  Jobrani was at his absolute funniest doing crowd work during the first twenty to thirty minutes of his set, during which he joked with audience members from Azerbaijan, Saudi Arabia, Afghanistan, and North Dakota, and his ability to keep all of the people and places straight and make off-the-cuff jokes with each was remarkable.

The Ordway is bringing more comedians to its recently renovated and charmingly intimate Concert Hall this fall, with Duluth native Maria Bamford on October 20 and Colin Mochrie and Brad Sherwood in June 2019.