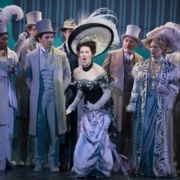 The premise of the story is Professor Higgins, an expert of phonetics, meets up with long time admirer Colonel Pickering who is a linguist. They encounter Eliza Doolittle, a lowly flower seller with a thick cockney accent. Together they challenge each other with their combined knowledge to teach this poor girl in the ways of refined society and proper English in a mere six-months. Their ultimate goal is to present her at the Embassy ball as a Duchess.  Eliza is wildly reluctant to be the guinea pig in their experiment after Higgins cruel belittling of her. However, the next day she appears at Higgins home to discuss the possibility of him making her a lady so she can ultimately open her own flower shop. Her doubt continues as Higgins continues his crude degrading comments of her. With Colonel Pickering’s encouragement and offer of financing the endeavour, she is persuaded once she thinks about this as her ticket to a new life as an independent woman.

This is where the modern, updated version is interspersed throughout the show. To those who were unfamiliar with the original script, this new version may easily be glossed over and not recognized. For the keen eye one will notice the fact that Eliza and Henry go from male dominance and female subordinate to become equals.  There are references from Higgins’ mother to encourage Eliza to stand up to Henry’s male superiority attitude and the audience even applauded at this point. Henry eventually realizes he cannot live without her companionship where she challenged him on every front.

The highlight for me was the music.  Songs long forgotten quickly came back to mind and I found myself humming along. Songs such as “Wouldn’t it be Loverly” reminded me of a phrase my grandmother uttered and I continue to use to this day.  Other very familiar songs include “With a Little Bit of Luck,” “The Rain in Spain,” and “ I Could Have Danced All Night.”

The set designs reflect the 1913 Edwardian era with it’s dark, rustic and gritty feel with its street scenes, the stately interior decor of Professor Higgins’ home and the ornately beautiful ballroom with the stunning backdrop of vivid blues and purples.  Scenery changes easily flowed from set to set as they moved twisted and turned.

Catherine Zuber did a remarkable job with the costumes.  The standouts were the crowd scenes at the horse race where women adorned elaborately beautiful hats to compliment their period  dresses but it was the hats that left an impression. At the Embassy Ball the men were dapper in their tuxedos yet the gowns worn by the women were exquisite. When Eliza enters the room and proceeds down the staircase in her soft pink dress with matching crown you could hear the audience gasp at her beauty.  The jewel accents on the gown and crown were made noticeable when the light caught them and added so much sparkle. The red satin cape was the perfect compliment to finish off the princess-like beauty of the ball.

Knowing that this performance would last a lengthy 3+ hours on a work night I was fearful that I may doze off at some portions of the performance; quite the opposite! I found this show to be very engaging and entertaining.  There were moments of comedic scenes where I found myself laughing out loud right along with the others in the audience. Even the younger couples near me who did not know the original story thought it was enjoyable. The combination of song, dance, beautiful costuming and breathtaking scenery created a night of pure delight.  I highly recommend seeing this while it is on a short run here in Minneapolis.

DEAL ALERT: Student/educator rush tickets are available!
• $30 per ticket — CASH ONLY
• The Orpheum Theatre Box Office will start selling in person at 2 hours prior to curtain
• Students/educators may purchase up to 2 tickets per valid school ID
• Subject to availability