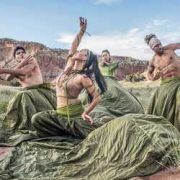 I knew it was a risk going to a contemporary dance show, since contemporary is FAR from my favorite kind of dance. But the production Oyate Okodakiciyapi was created by native American and Hawai’ian artists, and since I am interested in the music, dance, and cultures of those peoples, I thought it would at least be interesting and thought-provoking.

The production is a showcase of three dance numbers, unrelated except that they each come from indigenous American contemporary dancers. The first was a solo dance number by Christopher Morgan, which explores his Hawai’ian heritage. It includes spoken parts, which were delivered a bit like a TED talk, but which served the vital purpose of keeping me in the know on what the dance numbers were about. The dance was an interspersing of traditional hula and contemporary dance (mostly alternating rather than blended). As I don’t know anything about contemporary dance, I can only comment on what I like (or don’t). Morgan’s dancing showed some amazing strength and solid, clean movement, and in general was enjoyable to watch, although the contemporary part of the choreography contained some of the moves I find tedious such as “running in a circle” or “standing still in a pose.” To someone who understands contemporary dance, I’m sure you would “get” these parts much more than I. His hula was enjoyable as well – he has clearly trained for a long time. And his chanting was even stronger than his dancing. The stage setting was simple, with few props, and some suspended screens on which still and moving images were projected. The images were always a bit distorted, and the screens weren’t really large enough for me to make out the images for the most part. But I think I need new glasses, and my night vision is going a little bit, so maybe that was an issue; a friend who accompanied me had much less problem making out the images and really enjoyed that part. One thing that really did work for me was the parts of the number which combined Western classical and traditional Hawai’ian music. When I read about that in the program beforehand, I thought that I wouldn’t care for it, but I was wrong – not only was it interesting, but it really did work! The two musicians, Elsie Kaleihulukea Ryder (a Hawai’ian drummer and chanter) and Wytold (an electric cellist) deserve a mention, as they added something incredibly compelling to the production.

The choreographer and dancer for the second piece (Santee Smith) was exceptional. Given the length of the piece, it is a testament to Smith’s considerable ability and artistry that she looked just as strong at the end of the piece as at the beginning. Her quality of movement was so fine to me that she is one of the few contemporary dancers I’ve seen who can do the “standing still in a pose” move and it still looks really interesting. The music, however, was enough to give me nightmares. Since I am not a fan of contemporary music any more than of contemporary dance, the free-flowing screeches and animal growls that heavily punctuated the first three quarters of the number were difficult to listen to, especially because (technical note) the music was way too loud. I really appreciated the few lulls in the music where Smith did some singing or chanting on her own, as she has a remarkable and strong voice. Unfortunately for me, there was no narration during this piece, and I had not read the program beforehand, so I had very little idea what was going on. The set consisted of a stick hut, antlers, branches, maybe bones, and she interacted with each. The lighting on this piece posed difficulties for me, as the whole thing was in the semi-darkness (did I mention my night vision isn’t that great anymore?), so through practically the whole piece it was difficult for me to make out what was going on onstage. Her movements were intricate and solid however, and always interesting to watch, even though all I really got at the time was that it was some sort of struggle with something spiritual, other entities, and growth. My friend got a lot more of the context, so if you are a contemporary dance aficionado, no doubt this piece would be much less opaque to you. Consulting the program, I found out afterwards that the piece is “about personal healing, searching for connection, and revitalizing (herself) as a human.” For me, the lighting, music, and often tortured movements of the piece made this seem like a very dark journey. So, this was no light entertainment, but a stark artist’s expression.

The last number was by a dance company (Dancing Earth) which comprises dancers of varying styles. Perhaps because this company celebrates the variety of styles, there were no typical choral moments where they made use of the visual drama that can be created by everyone dong the same thing simultaneously or in tight choreography. Although I missed this, I appreciate that that is probably just not the type of company they are. This number also contained spoken word parts, and although the music was too loud and busy for my old ears to understand a lot of it, it was clear that the message was about environmental degradation and out relationship to mother earth and father sky. During some parts there was a little too much variety of uncoordinated different actions going on for me.  And a few parts, conversely, repeated the same general movements over and over a few too many times for me.  But overall it was visually quite beautiful. Since all the dancers were, individually, so unique, I would have really liked the opportunity to see more solos. However, their work together showed a nice harmony, like you might imagine in a family or group of friends that is all working together – where there are no rules on who does what, how, but everyone keeps the interest and progress of the group in sight.

Oyate Okodakiciyapi was only here for one night in St. Paul.  Click for a list of upcoming Dance series performances at the Ordway.  It’s my experience that the  Dance Series at the Ordway are usually fantastic!