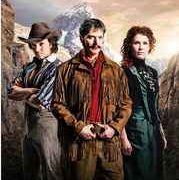 First, let’s cut to the chase.  Anyone who already knows they like musical theatre– go see this production of Paint Your Wagon.  The End.

For anyone who is undecided, here are a few things that might convince you:

The songs.  If, like me, you loved the movie (there are a few of us), all the songs are here, plus some. The plot of both the movie and the stage play is a story of goldminers in a boom town in 1800’s California.  Beyond that, the plot of the stage play bears very little resemblance to the movie, but really, it’s SO different that it’s fairly easy to just treat them as 2 different stories. Normally, when I love a score, remakes rarely measure up to the version I fell in love with. However, most of the numbers in this production are an exception. The re-orchestration and slight changes in the delivery and surrounding dialog made the numbers new and interesting, but not so new that it was bothersome to my “I love this song!” internal Musical geek.

Fun choreography. This play had some of the best dancing and group choreography I have ever seen in a touring stage play. Although there are clearly a lot of good dancers in the show, few if any productions can be chock full of stellar dancers. The choreographer of this production did that genius thing that I see too rarely, which is taking natural human movement and making it into something visually interesting. The large-group numbers are especially effective. I also appreciated the fact that all the dances were in character. Although a few of the male cast could have undoubtedly busted some serious moves, they all kept to a convincing “I’m a farmer/saloon owner/gold miner” style.

Great orchestration and sets.   The sets in this production were fascinating and simple at the same time. Although they were a blend of modern (representational) and traditional “old western saloon” motifs, they never clashed. And the scene changes were smooth and flawless.

New characters and plot lines.  I saw an amateur production of the stage play about 20 years ago and in my recollection it was dark and grimy, with really no likeable characters.  This new version, in addition to rewriting characters and dialog, also brings in characters of more diverse cultural backgrounds.  This is more reflective of the true racial diversity of a Gold Rush town– the driving theme behind this remake.  The most interesting, poignant, and convincing characters in this mélange are two African American men (played by Rhett George and Kyle Robert Carter), one a free man and one a slave, who meet in the boom town, become allies, and work together to try to secure the enslaved man’s freedom.

Justin Gregory Lopez.  Lopez plays Armando, a Hispanic American son of an old Californian ranching family, who now works in the mining camp after losing his family and home through the political upheaval and racism of 1800s California. Holy crap this guy is awesome (sorry, I had to gush there for just one moment). His acting looks effortless. His singing is so powerful and yet so relaxed and beautiful it made me get misty. Add to that wonderful comedic timing, and the result is he is now one of a very small number of actors I would probably go to see in anything.

All that said, there are a few weak points in the production, and you might want to give it a skip if any of these is really bothersome to you:

Unconvincing relationships.  If you need romantic relationships to be nuanced and believable, you will be mostly disappointed. Especially egregious is the lack of time devoted to the supposed (but totally unconvincing) romance between Armando and Jennifer (his business partner’s daughter).   They are given a nod with the old musical trick “one song and they fall in love.” And while the song is one of the best in the show, it’s not nearly enough to be convincing.  Additionally, there was a missed opportunity to go more in depth regarding the lead character’s struggle with his deeply buried racism, which is at odds with his affection for his Hispanic business partner and his outward moral and social standing against racism.  Finally, the chirpy ending, where different races and cultures are supposedly all living happily side by side slaps an awkwardly unbelievable Hollywood happy ending on a story that we all know historically was not always so happy and was not an ending.

Lack of interesting female characters.  Let’s see, smart-mouthed older woman – check. Innocent young daughter – check. Saloon tart – check. The lead character’s daughter arrives from the East where she is attending college, which made me hope that she would have something interesting to say. But alas, she’s a cookie-cutter pretty blonde 1800’s young miss, blushing, wringing her hands, whine-screeching through every line, and then smooching her fella after he sings her one song.  Boring. And annoying. The saloon dancers were much more likeable, but the lack of any exploration of their back stories (a-GAIN) was disappointing.  Because, they were probably prostitutes, and we all already know everything we need to know about them with that label, right? Ugh.

Overwhelmingly, as I alluded to at the beginning, I really loved this production. Although some trade-offs were made to deepen the cultural diversity of the characters at the expense of developing individual characters and relationships, it was still a visually delightful and fun show.  The wonderful acting, singing, and comedic performances by Justin Gregory Lopez (Armando), Rhett George (H. Ford), and Robert Cuccioli (Ben Rumson) deserve special mention.

Paint Your Wagon is at The Ordway Theater through August 21, 2016.  Tickets start at $34. DEAL ALERT: Discount tickets are available via Goldstar!