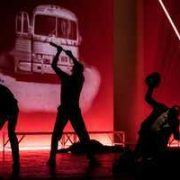 Fifty years after the height of the Civil Rights Movement and the end of segregation and government sanctioned discrimination in the deep south, many of us may forget that the struggle for freedom was fought by many people whose names we never learned in history class.  We all know about leaders like Martin Luther King, Jr. and Rosa Parks, but most of the Freedom Riders, who boarded buses into the deep south to challenge the unconstitutional system, were students and young professionals who had the courage and dedication to the cause of freedom to risk their very lives to stand up for what they believed in.  The story of one of the first groups of these everyday heroes is told in The Parchman Hour.  The story of the groups of Riders who sang freedom songs as their numbers filled the Mississippi jails inspired this production, which features many of these songs, interwoven with vignettes and historical exposition that puts you right in the middle of the infamous Parchman Farm prison.  Many actors portray multiple Riders, whose mug shots are shown on the backdrop as they talk, so you never forget that these were real people who endured such barbaric treatment from their fellow Americans.  This powerful story could not have been staged at a more important time in our history, but it doesn’t feel like doing your homework.  The musical performances, especially Zonya Love’s, are both breathtaking and heartbreaking.  You will be inspired and engaged from start to finish, and even though we think we know how the story ends, The Parchman Hour reminds us that the history is still unfolding.

The Parchman Hour is at The Guthrie Theater through November 6th.  Tickets start at $15.