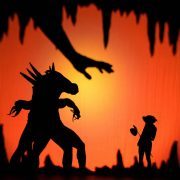 Much to my delight, Pilobolus returned to The Ordway Saturday evening. Over the years, the company has woven incredible choreography and athleticism, clever shadow play, and quirky multimedia, into an overall package that has made Pilobolus one of my most favorite touring groups. Their latest production, Shadowland, is something of a departure from their recent productions, however, as it presents a single linear story throughout the uninterrupted 90-minute performance.  While dance is still the glue that holds everything together, ultimately–as the name “Shadowland” suggests–the focus of the show was on the shadow artistry and some of the elements that had come to comprise a Pilobolus show were significantly reduced or discarded altogether.

Shadowland is about a girl whose dreamland takes her on a wild, and sometimes unnerving, adventure.  Taking place both behind and in front of the screen, the show mixed three-dimensional and two-dimensional realities, further emphasizing the shifting nature of dreams.  I appreciated Shadowland for its artistry and creativity–sometimes you forget that it’s a live performance and not digital wizardry.  I have to admit, however, that I was expecting something a little less intense overall, if not exactly light-hearted.  The finale did feel quite satisfying, however, as they presented a cross-country road trip with Minneapolis and St. Paul-specific shadow scenes.

As a side note, there were a few kids in the crowd whose parents were probably expecting the Pilobolus seen in the past and on morning variety shows. Shadowland is probably not suitable for younger children. The story elements can get pretty intense, oftentimes loud, and a bit violent. Although done in a very tasteful way, as Piloblus’s focus is the human body and the beauty in what it can achieve, there is also some nudity to take in consideration depending on your child and comfort level.

Piolobus was here for one night only. Don’t tell me I didn’t warn you, both on the blog and via social media. You’ll just have to wait until the next time they are in town, which is hopefully next year!