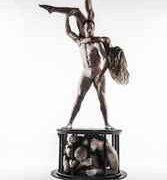 Shortly after we sat down to watch the Pilobolus dancers warm up before the show, which they do onstage and is often a show in itself, a friend of mine from work spotted us and came over to say hi.  As we talked about our previous experience seeing previous performances, the question came up: what is a Pilobolus show?  Is it dance? storytelling? performance art? thought piece on the human condition? eye candy?  It’s difficult to pin down exactly, but I think everyone can agree that Pilobolus is a singularly impressive display of diligence and preparation.

The show began with a piece that was absolutely stunning.  Clad only in flesh-toned thongs, the performers demonstrated feats of strength, agility, and rhythm–not to mention trust, intimacy, and coordination–that was simply breathtaking.  You can’t take your eyes off the performers for a second, not that you’d want to.  Each with physiques worthy of being carved in marble, one woman and two men share the stage with only a small, round table (pictured).  It’s the height of simplicity and grace that will stay with you long after the other pieces fade into memory.

The rest of the show consisted of the group’s usual mixture of live performances and unique and clever short films (although one was a repeat from the last show that stopped at the Ordway a few years ago).  The film pieces do more than just keep your attention while the performers rest and the grips reset the stage; like the live performances, they deliver interesting stories without the use of any dialogue.  The most thought provoking live piece featured a sort of birthday party that was simultaneously poignant, humorous, and creepy.  It was not so much a dance performance, in the usual sense, but the performers’ remarkable abilities allowed the physical humor to stand out.

As compared to the prior Pilobolus show, this one is less family friendly and for the masses.  The partial nudity in the first piece, combined with other instances of simulated oral sex and music from Radiohead and Rage Against the Machine, it may not be everyone’s cup of tea.  Nevertheless, the show is a truly unique and enriching experience.

Unfortunately, Pilobus was only in St. Paul for one night.  Click for a list of upcoming performances at The Ordway.