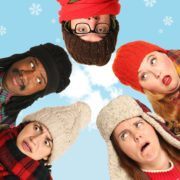 Like the decorations aisle at Target, with Halloween out of the way, The Brave New Workshop is plowing straight ahead into its 2017 holiday special.  As crisp as the late-fall air, The Polarizing Express: Dysfunction Junction perks you up and refreshes your spirit.  As we all aspire to do this time of year, BNW swaps out political dysfunction for the personal and familial variety.  This year, the writers went back to the basics, making fun of the holidays with sketches about fruitcake, the perils of regifting, and reflecting all of your personal failures while fielding deeply personal questions from family around the holiday table.  Sometimes the topics can seem cliche, but there’s something cathartic in all of those universal themes.  To keep things fresh, BNW gets “weird” this year in efforts to mine new laughs, and it turns out that weird is funny.  I have long admired BNW veteran Lauren Anderson’s commitment to a joke; this year, her sketch about the elf in charge of Santa’s Sex Toy department was so on point that even the cast had a difficult time keeping it together.  Beyond that, there was an overall sense of intimacy in this latest production that hasn’t been there for a few shows.  I felt like we were all one big family celebrating, laughing, cringing, and all in on the joke.  There’s a lot about the show that is consistent from year to year, but rather than feeling tired, it felt comforting.  I left feeling jolly and what more can you ask for this time of year?

The Polarizing Express is at the Brave New Workshop through January 27, 2018. Limited discount tickets are available through their traditional promotions, Goldstar, and Happy Hour Squared

30% off at Brow Chic
Scroll to top