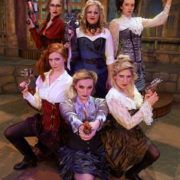 I was pleasantly surprised by the fabulous opening chorus of “Princess Ida” at the Sunday matinee performance of the Gilbert and Sullivan Very Light Opera Company. It’s not that I expected a poor performance; after all, “Gilbert and Sullivan” is in the company’s name. But I have never seen this company perform before, and Gilbert and Sullivan are really easy to do badly, even with a talented cast. However, before I knew it, the entire first act sped by in entertaining whirl of comedy, fabulous choral numbers, and fascinating Steampunk costuming and set design. Originally written in the late 1800s, the original libretto is a bit sexist. But some clever staging and the editing of a line or two kept the production light and entertaining.

A few performers who stunned were Scott Benson (King Gama), Deb Haas (Lady Blanche), and Kara Morgan (Melissa, Lady Blanche’s daughter). The latter two had a duet (“Now wouldn’t you like to rule the roast”) which in my opinion was the best number of the night. In addition, they delivered sublime singing and solid comedic acting in all of their other scenes as well.

Although all of the choral numbers were perfection, a couple of the soloists, especially the role of Princess Ida, were very difficult to understand while singing (although the actor has an exceptionally lovely voice). In a Gilbert and Sullivan production this is kind of a big deal. So if you attend this production (and I recommend you do!) you may want to familiarize yourself with the basic plot before attending, or arrive in time to read the program. If I hadn’t, I would have lost many of the plot points, but the event would still have been enjoyable.

The next production by the Gilbert & Sullivan Very Light Opera Company can’t come soon enough for me!

Princess Ida is at the The Howard Conn Fine Arts Center in Minneapolis through March 25, 2018. Adult Tickets start at $22.