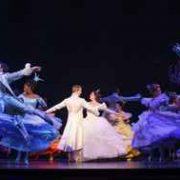 Prior to last night, I can’t remember the last time I saw any version of Cinderella.  I suspect it was the movie Ever After with Drew Barrymore circa 1998.  Luckily for me, my guest has seen just about every other rendition, so I can draw on her expertise to comment on how the currently-touring Rodgers + Hammerstein’s Cinderella compares to those versions.  From what I’m told, this new interpretation shares little with the original movie staring Julie Andrews, with the exception of the music.  That’s not necessarily a bad thing, however.  The new version packs in quite the comedic punch!  I consider myself a tough critic when it comes to stage comedy, and I was ready to snooze through 50-year-old jokes aimed at my grandmother’s generation, but I frequently found myself laughing out loud to the fresh and unanticipated humor throughout the show.  In addition, some effort was made to make the Prince “worthy” of desire.  From what I hear, this is a departure from the original, in which the prince has little to offer but for good looks and a title to bestow.  The only thing that wasn’t particularly modern was that Cinderella was incredibly waif-like and the most dreadful stepsister was heavy.  I’m not particularly an advocate for transforming notions of beauty or body shaming, but it seems as there is a lost opportunity in those casting choices.

As far as production value, the cast, set design and OMG THE MAGICAL TRANSFORMATIONS were all top notch! I don’t have a single thing to criticize about those elements.  They provided a magical escape from the day-to-day.

I’m generally not into fairy tales. I haven’t seen a Disney movie in decades.  That said, I had a thoroughly enjoyable time last night at Rodgers + Hammerstein’s Cinderella.

Rodgers + Hammerstein’s Cinderella is at the Orpheum Theatre through September 13, 2015.
Tickets: start at $29.
DEAL ALERT: Student/Educator Rush will be available for all performances EXCEPT Saturday and Sunday matinees of Rodgers + Hammerstein’s Cinderella. Policy: 2 tickets per valid ID; $25 per ticket, cash only; available only at the Orpheum Theatre Box Office beginning 2 hours prior to the performance; rush line forms outside of theatre; student/educator must be present with valid ID at time of purchase; resale or transfer of rush tickets is strictly prohibited and all tickets are subject to availability.

Discount tickets: The Best of Brave New Workshop: Junk from Our Trunk
Scroll to top