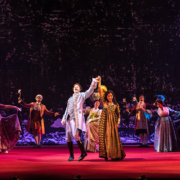 Sally & Tom, like many of the Guthrie production this season, dances the delicate line between education and entertainment: education on the human experience, rather than what is taught in history books.

Sally & Tom explores the relationship between founding father Thomas Jefferson, and his relationship with slave Sally Hemmings. The play takes place in Monticello, after Jefferson’s return from Paris; the year is 1790. Sally is Jefferson’s mistress and maid to his daughters, her brother James and sister Mary are also slaves belonging to Jefferson and working at Monticello.

Playwright Suzan-Lori Parks underscores that excavating the truth in our history is uncomfortable. Slaves belonged to owners, they were bought and bred and sold. Freedom was not a conversation for the black man – much less the black woman. However, in Sally and Tom, it is – both then, and now.

Sally & Tom are also Luce and Mike, rehearsing for a production of their own. Furiously preparing for opening night, scripts are rewritten, scenes are changed, actors are switched, and the play renamed. E Pluribus Unum becomes The Pursuit of Happiness.

There isn’t a happy ending. In fact, there is no ending, in the sense there is no closure. Questions remain unanswered. As Parks eloquently says, “[h]istory is now. What was happening is happening.”

Heroine Luce struggles to go forward. It seems playwright Parks wants us to do just that.

Sally & Tom is playing at the Guthrie Theater in Minneapolis, on the McGuire Proscenium Stage, from October 1 through November 6, 2002. Tickets range from $20-$79. Click here for rush ticket info.

Review: Plowin’ Through
Scroll to top