Blog - Latest News
You are here: Home1 / REVIEW: School of Rock: The Musical 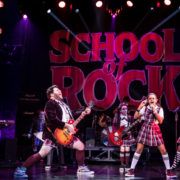 My two-word review of School of Rock: The Musical would be, “It Rocks!” If your eyes didn’t roll so hard they fell out of your head, bear with me, as you will probably like this show.

School of Rock: The Musical is based on the movie featuring Jack Black. The plot is a predictable Hollywood story line centered around an outcast rocker in need of money who deceptively lands a job at an uptight private school wherein he teaches his new students all about Rock ‘n Roll.  There are no surprises in the formulaic plot and the characters, too, are generally one-dimensional–it’s easy to identify the story arc of each character after about a one-minute introduction.  It appears at least some effort was given to avoid overly strong stereotypes via diverse casting, but that seemed to be the extent of their effort.  None of this is particularly surprising for a movie-to-musical adaptation, but placing that critique aside, where School of Rock really shines is in the actors’ performances.  Given Jack Black’s history with the genre-defining mock-rock band, Tenacious D, and just as with the film, it’s very difficult to distinguish the character from the actor.  This would seem to be a very difficult niche to fill, yet Rob Colletti, who plays the main character, Dewey, was fantastic in every way.  Rob’s performance is impressive given the incredible amount of energy required for the role.  He mastered the loveable, dysfunctional goofball who does nothing right, yet somehow seems to do no wrong. The uptight principal, played by Lexie Dorsett Sharp, really stood out during “Where Did the Rock Go?” in which she became more human and sincere, as compared to much of the role as a rigid, deadpan, buttoned-up schoolmarm.  Another cliched “transformation,” but it still works.  The real treat, and probably the number one reason for seeing the show was watching the talented school-age kids jamming on stage. They are living the dream up there, and at such a young age, which results in a really amazing experience for everyone to enjoy. You can’t help but smile, chuckle, and tap your foot.
School of Rock: The Musical isn’t your typical movie-to-musical adaptation. It’s got real heart and a cool factor that makes it more worthy of your hard-earned dollars than many others that have come into town in a while.

School of Rock: The Musical is at The Opreheum Theatre in Minnneapolis through March 11, 2018. Tickets start at $39.

DEAL ALERT: A very limited amount of Student/Educator Rush tickets will be available for all performances. 2 tickets per valid student or educator ID. $25 per ticket, cash only. Available at the box office two hours prior to showtime. Subject to availability, seats together not guaranteed.

Pet a corgi
Scroll to top