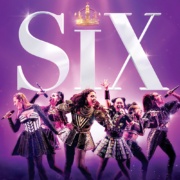 I walked into the Ordway last night knowing little about the music of SIX, the new musical setting up shop in Saint Paul for the next two weeks.  I’m not exactly sure how that was possible.  The SIX studio album is the second-highest streaming cast recording in the world, with an average of 400,000 streams per day!  In a world with so many movie-to-musical adaptations that are driven more by evoking bland nostalgia than by actual music, I was very much looking forward to a musical with such an acclaimed book and score.
What I did know in advance about the show was that there were a lot of people who were very excited for it to come to the Twin Cities.  As if on cue, the crowd went wild for the first song, which is a campy girl-band number.  I wondered to myself if this was going to be a disappointing evening.  It’s definitely got a vibe to it that whiffs of trying to ride a Hamilton wave–it’s a tongue-in-cheek historical ensemble, how can it not?  The notion that SIX is just some cheap ploy to part eager fans from their cash, however, was effectively obliterated by the second tune; I was hooked by the absolutely incredible performance of “No Way” featuring Adrianna Hicks as Catherine of Aragon.
The show has a somewhat unique structure in that it lacks the traditional progression of scenes with sets and props.  It’s more like a reality show concert battle in which the six wives of Henry VIII “battle” to reclaim their identities from the historical footnotes.  Along with a few group numbers, each wife has her own song with a unique musical style.  Lyrically, the show is impressive, crafted in a way that captures that witty, smart, and captivating air from Hamilton, but in a package that is all its own. The melodies are extremely catchy and the Broadway-bound talent are as good as it gets (even with two alternates in the mix). The fantastic music, performances, and costumes are something to hoot and holler for.  There’s enough glitter, bright lights, and high-energy to rock a stadium. It’s a fabulously good time and I can’t recommend enough that you catch this show while it’s in town.
SIX is at The Ordway in St. Paul though December 21, 2019. Tickets start at $40. Click here for more info on The Ordway’s rush ticket program.