Blog - Latest News
You are here: Home1 / REVIEW: Something Rotten 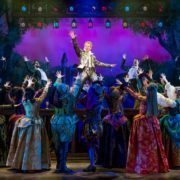 Something Rotten is a rip roaring comedy about playwrights in the late 1500s struggling to make a name for themselves in the cutthroat world of Theatre. The Bottom Brothers are in fierce competition with superstar William Shakespeare and are determined to prove their superiority. In attempts to ensure that they come up with a hit, playwright Nick Bottom enlists the help of a psychic, whose vision is a bit – blurry. Hilarity ensues.

Something Rotten presents a sense of humor reminiscent of Monty Python in that it is extremely wacky, irreverent, and goofy in all the best ways. Any time you make Shakespeare–a man synonymous with theatrical genius–the antagonist who revels in his “rock star” status and continually hip thrusts his way through the performance, you know that the next few hours will be as far from AP Lit. as possible. As if to underscore the Python vibe, there’s even a whole musical number devoted to dancing eggs (having to do with a mistaken vision about Shakespeare’s most famous work about a Danish prince).

Playing up the satire of theater generally, and musicals in particular, even the toughest cynic like myself couldn’t help but laugh. There’s plenty of mockery of the secular canonization of Shakespeare and how little the world has progressed in these last 500 years. Since my educational background isn’t in the arts, I was concerned that I wasn’t catching all of the jokes, but if you at all love the theater or a good laugh, I think Something Rotten is guaranteed to delight.

Something Rotten is at the Orpheum Theatre in Minneapolis through April 8, 2018. Tickets start at $39.

DEAL ALERT: A very limited amount of Student/Educator Rush tickets will be available for all performances. 2 tickets per valid student or educator ID. $25 per ticket, cash only. Available at the box office two hours prior to showtime. Subject to availability, seats together not guaranteed.

50% off Breakout Games rooms TODAY ONLY!
Scroll to top