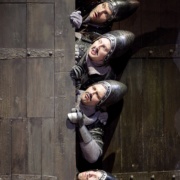 Just when you needed a good reason to get as far away from Minneapolis as possible, it’s St Paul to the rescue!  The Ordway welcomes the musical you’ve been waiting for since you discovered a quirky British comedy series as a teenager, but then learned that your parents liked it when they were kids, but then decided that was really ok after all… Monty Python’s Spamalot is the musical spoof of the satirical motion picture spoof of the tale of King Arthur and the knights of the round table that’s also a spoof on musical theater in general.  Yes, there’s a lot of spoofery going on.  It’s one part homage to the classic Python film, two parts mockery of the musical theater industry; and five parts silly accents and costumes (or maybe just three parts…) The show pulls the best bits from popular Python movies like the Quest for the Holy Grail and The Life of Brian, and also adds hilarious set pieces that keep you wondering ‘what will they come up with next?’

There isn’t a lot left to say about this long-running hit’s triumphant return that hasn’t already been said, but that’s probably ok. The only thing that I noticed is that the sound was rather muddy from where I sat (left side, orchestra level). This isn’t a big deal most of the time, but with so many jokes flying fast and furious, you often don’t want to miss out because you couldn’t understand what they were saying.  So, make sure your ears are clean and you’re ready to laugh.

One final note, although the content is very immature, this is not a show for young kids or those easily offended by toilet humor.