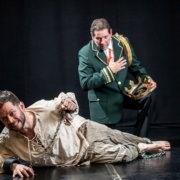 Sueno explores the complexity of the questions around how one would lead if given the opportunity when that person had known only prison and loneliness.  What is dream and what is reality?  Is “reality” also a dream?  On what do human beings base their actions and decisions, especially when one has power to affect many lives?

With this intriguing premise, the brilliant actors were committed to bringing their characters to life.  Especially convincing and moving were Ernest Briggs as Clotaldo, Fernando Collado as Segismundo, and Katia Cardenas as Estrella.

The space of The Lab Theater was used well, as the stage was comprised of the entire room, with spare, symbolic props providing all that was needed to convey the atmosphere of each scene and engaged the imagination of the viewers.  Lighting was used to great effect.  The sound needs to be enhanced, as some of the dialogue was difficult to hear.  Costumes would have been more effective in conveying the character’s identities and attitudes if more specific to their roles.  Most of the men wore modern suits with additional sashes to indicate rank, but especially the character of the Duke of Warsaw needed a better fit to indicate status, so the actor’s fine portrayal would have been enhanced by his visual appearance.

The overall strength of the play was muddied by a few confusing elements.  It seemed to be heart-rending tragedy, broad comedy, and mockery of society mixed together, but at times it seemed to be unsure which aspect it was embodying in the moment.  By the second half, the actors gave more indication of which was being attempted in each scene.  Some of the language was apt for the time period of four centuries in the past while modern expressions were liberally sprinkled in, usually for comic effect.  At times this felt jarring.  Also confusing was the entrance of a row of spectators, not in costume, arriving through the stage set during a scene before being seated.  It took away from the powerful moment being acted at that time.  The play could also be shortened a bit by speeding up the action in the final scenes, and removing some of content of the actors’ soliloquies.  By the last scenes we had already caught on to most of what they explained in their long speeches.

It is a play worth experiencing, and we hope that the director will find a way to consistently clarify the moments of comedy and plot-changes so that we as the audience can spend less time trying to figure that out and more time engaging the very important themes that the play addresses.

Thank you to Pangea World Theater for the committed work they do in raising up diverse voices and showcasing talented actors.  Sueno gives us the opportunity to experience both.

DEAL ALERT: Volunteer your time and see this production for free! Click here for more info.