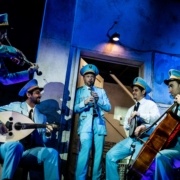 When the Alexandria Ceremonial Police Orchestra arrives in the small Israeli desert town of Bet Hatikva instead of their intended destination of Petah Tikvah, we see how the group of Egyptian musicians quietly touch the lives of the townsfolk in small, but meaningful ways.  Quiet is the operative word for The Band’s Visit, the hauntingly beautiful musical running at the Orpheum in Minneapolis through Sunday.  This is not the loud, flashy, song-and-dance-razzle-dazzle that one might expect from, say Phantom of the Opera, which finished its run here a few weeks ago.  Instead, it is a deliberate meditation on how life can take us in directions that are often different from how we imagined.  In sorrow, heartbreak, longing, and hope, The Band’s Visit shows how people are brought together by the things that make us human, regardless of where we come from.  It’s kind and heartwarming, without being obviously so–something hard to escape in the midst of the endless onslaught of maudlin holiday specials.

This is a show that would feel right at home down the street at the Guthrie, with its indie film vibe and methodical pacing, but the musical that swept the Tony Awards in 2018, embraces the juxtaposition of being a small play in a large space.  That feeling of disorientation, particularly for someone who has seen a fair share of productions in the Orpheum’s grand hall, is just what the director appears to be going for.  Set in a region fraught with conflict, the writers carefully sidestepped the hot-button issues without ignoring their influence.  Where most dramas are fueled by conflict, character and music–much of which is performed by the actors onstage–drives this show, with understated performances that feel lived in and natural.

Like everything else in this musical, the songs are spare and understated.  There’s only a single number with the whole chorus onstage, which again shows how Visit is willing to upend norms and expectations. You will, however, be humming “Omar Sharif” in the shower for the next week.

The Band’s Visit is a remarkably different musical theater experience and one you will definitely not want to miss.

DEAL ALERT: Student/Educator rush tickets are available for all performances. Two tickets per valid student or educator ID. $30 per ticket, cash only. Available at the Orpheum Theatre Box Office two hours prior to showtime. Subject to availability.

The Band’s Visit is at the Orpheum Theatre in Minneapolis through  December 15, 2019.

B1G1 later at My Burger
Scroll to top